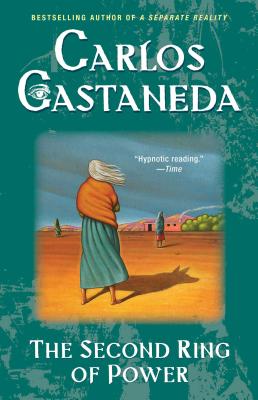 Back from the abyss, Castaneda encounter his greatest test on the journey towards impeccability and freedom: to outwit and overpower the sorcery of Doña Soledad, herself transformed from a defeated and meaningless life to a warrior, a hunter and a "stalker of power."

Now the combat will begin. Now the journey will continue. Till the last danger is faced...the final paradox embraced.

Born in 1925 in Peru, anthropologist Carlos Castaneda wrote a total of 15 books, which sold 8 million copies worldwide and were published in 17 different languages. In his writing, Castaneda describes the teaching of Don Juan, a Yaqui sorcerer and shaman. His works helped define the 1960's and usher in the New Age movement. Even after his mysterious death in California in1998, his books continue to inspire and influence his many devoted fans.

Praise For Second Ring of Power…

Praise for the groundbreaking work of bestselling author Carlos Castaneda

"Extraordinary in every sense of the word."
— The New York Times

"It is impossible to view the world in quite the same way."
— Chicago Tribune

"Taken together [Castaneda's books] form a work among the best that the science of anthropology has produce."
— The New York Times Book Review
or support indie stores by buying on
Copyright © 2020 American Booksellers Association