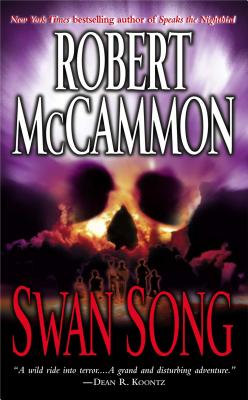 An ancient evil roams the desolate landscape of an America ravaged by nuclear war.
He is the Man with the Scarlet Eye, a malevolent force that feeds on the dark desires of the countless followers he has gathered into his service. His only desire is to find a special child named Swan -- and destroy her. But those who would protect the girl are determined to fight for what is left of the worldŠand their souls.
In a wasteland born of rage, populated by monstrous creatures and marauding armies, the last survivors on earth have been drawn into the final battle between good and evil that will decide the fate of humanity....

Robert McCammon is the New York Times bestselling author of Boy's Life and Gone South, among many critically acclaimed works of fiction, with millions of copies of his novels in print. He is a recipient of the Bram Stoker Lifetime Achievement Award, the Grand Master Award from the World Horror Convention, and is a World Fantasy Award winner. He lives in Alabama. Visit the author at RobertMcCammon.com.

"A broad, compelling story... a long, satisfying look at hell and salvation."

"A chilling vision that keeps you turning pages to the shocking end."
— John Saul
or
Not Currently Available for Direct Purchase
Copyright © 2020 American Booksellers Association