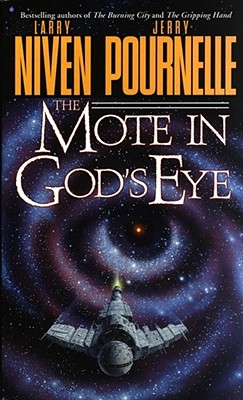 The Mote in God's Eye

Writing separately, Larry Niven and Jerry Pournelle are responsible for a number of science fiction classics, such as the Hugo and Nebula Award-winning Ringworld, Debt of Honor, and The Integral Trees. Together they have written the critically acclaimed bestsellers Inferno, Footfall, and The Legacy of Heorot, among others.
The Mote In God's Eye is their acknowledged masterpiece, an epic novel of mankind's first encounter with alien life that transcends the genre.

Praise For The Mote in God's Eye…

Robert Heinlein Possibly the finest science fiction novel I have ever read.

San Francisco Chronicle As science fiction, one of the most important novels ever published.

Columbus Dispatch A superlatively fine novel...no writer has ever come up with a more appealing, intriguing, and workable concept of aliens.

Frank Herbert A spellbinder, a swashbuckler...And, best of all, it has a brilliant new approach to that fascinating problem -- first contact with aliens.

Theodore Sturgeon One of the most engrossing tales I've read in years...fascinating.

Minneapolis Tribune Intriguing and suspenseful...the scenes in which the humans and aliens examine one another are unforgettable.

Larry Niven (left) is the Hugo and Nebula Award-winning author of such classics as Ringworld, The Integral Trees, and Destiny's Road. He has also collaborated with both Jerry Pournelle and Steven Barnes on The Legacy of Heorot, Beowulf's Children, and the bestselling Dream Park series. He lives in Chatsworth, California.
Larry Niven and Jerry Pournelle were the joint winners of the 2005 Robert A. Heinlein Award.

Jerry Pournelle (right), a past winner of the John W. Campbell Award, has collaborated with Niven on numerous bestsellers. He has also written such successful solo novels as Janissaries and Starswarm. He lives in Studio City, California.
Larry Niven and Jerry Pournelle were the joint winners of the 2005 Robert A. Heinlein Award.
Loading...
or support indie stores by buying on