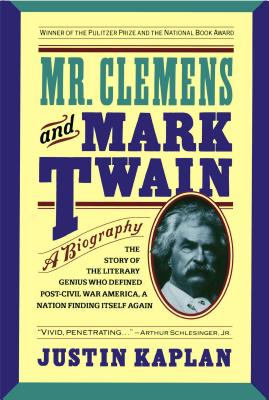 With brilliant immediacy, Mr. Clemens and Mark Twain brings to life a towering literary figure whose dual persona symbolized the emerging American conflict between down-to-earth morality and freewheeling ambition. As Mark Twain, he was the Mississippi riverboat pilot, the satirist with a fiery hatred of pretension, and the author of such classics as Tom Sawyer andHuckleberry Finn. As Mr. Clemens, he was the star who married an heiress, built a palatial estate, threw away fortunes on harebrained financial schemes, and lived the extravagant life that Mark Twain despised. Kaplan effectively portrays the triumphant-tragic man whose achievements and failures, laughter and anger, reflect a crucial generation in our past as well as his own dark, divided, and remarkably contemporary spirit.

Mr. Clemens and Mark Twain brilliantly conveys this towering literary figure who was himself a symbol of the peculiarly American conflict between moral scrutiny and the drive to succeed. Mr. Clemens lived the Gilded Life that Mark Twain despised. The merging and fragmenting of these and other identities, as the biography unfolds, results in a magnificent projection of the whole man; the great comic spirit; and the exuberant, tragic human being, who, his friend William Dean Howells said, was “sole, incomparable, the Lincoln of our literature.”

Praise For Mr. Clemens and Mark Twain: A Biography…

Howard Mumford Jones The richest, most subtle, and best-sustained analysis of Mark Twain anywhere to be found....This is a great book, one of the greatest analyses of an American personality.

Maxwell Geismar Mr. Clemens and Mark Twain is bold and discerning in its treatment of the central conflicts of that primitive genius, Mark Twain. It is illuminating to me in the discussion of complex and puzzling aspects of a dark and doubled personality.

Henry Nash Smith Mr. Clemens and Mark Twain is sure to remain for a long time the standard book about an extraordinary, complex personality and a career that touched almost every aspect of American culture in the later nineteenth century.

Arthur Schlesinger, Jr. Kaplan's book will undoubtedly be the portrait of Mark Twain for this generation.

John Kenneth Galbraith Even the best scholars, reading this book, will find themselves dangerously close to unqualified praise....Not only does Kaplan write economically and lucidly but he has a beautiful ear for Mark Twain's language, invention, and comedy.

Justin Kaplan is the author of Mr. Clemens and Mark Twain, which was awarded a Pulitzer Prize and a National Book Award, and of Walt Whitman: A Life, which won the American Book Award. He is a member of the American Academy and Institute of Arts and Letters. He lives in Cambridge, Massachusetts, with his wife, novelist Anne Bernays.