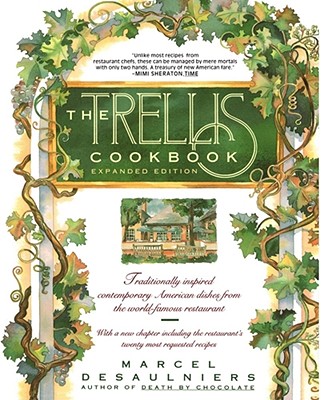 The Trellis Restaurant, located in Colonial Williamsburg, is one of the finest and most innovative restaurants in the country today. Now, award-winning chef Marcel Desaulniers shares his original, yet traditionally inspired, recipes in a cookbook that truly captures the informal elegance of the restaurant itself.
With Desaulniers's simple, easy-to-follow directions, anyone can re-create the Trellis hallmarks -- Curried Apple and Onion Soup, Shiitake Mushroom Pâté, Chesapeake Bay Clam Chowder -- that will start off any meal with panache. Go on to enticing entrées such as Smoked Catfish with Country Ham, Grilled Duck Breast with Raspberries and Macadamia Nuts, and Loin of Lamb with Fennel and Curry. Pumpkin and Currant Bread and Black Pepper Brioche are the perfect accompaniments to any meal, and delectable desserts -- Strawberry Papaya Sorbet and Death by Chocolate -- provide luscious finales.
A new chapter -- twenty of the restaurant's most requested dishes -- and a unique feature, "the Chef's Touch," in which Desaulniers offers his secrets and advice, make The Trellis Cookbook the culinary chef d'oeuvre of new American fare -- and the ideal addition to every cook's home library.

Mimi Sheraton Time Unlike most recipes from restaurant chefs, these can be managed by mere mortals with only two hands. A treasury of new American fare.

Joyce Goldstein Chef/Owner, Square One Restaurant Marcel Desaulniers makes it seem easy because of his clear directions and explanations...he makes us want to cook the food just so we can taste it.

Marcel Desaulniers is the executive chef and co-owner of The Trellis Restaurant. A graduate of The Culinary Institute of America, and now a member of their board of trustees, Desaulniers has received many awards in his lifetime, including the 1983 Food &amp; Wine Magazine's Honor Roll of American Chefs, and COOK'S Magazine first Who's Who of Cooking in America in 1984.
Loading...
or support indie stores by buying on