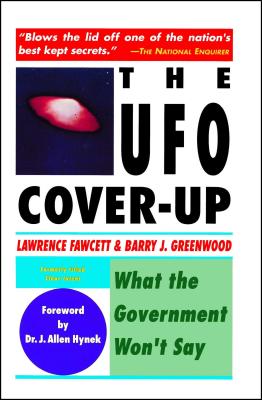 What the Government Won't Say

Authors Lawrence Fawcett and Barry J. Greenwood reveal in this fascinating, thought-provoking book, based on the government's own research and internal files, what they have learned about: UFO's as a threat to national security. UFO sightings at military bases in the United States, North Africa, and the Middle East. The cover-up role of the FBI and the CIA. The presidents, legislators, astronauts, military leaders, and international scientific authorities who are on record as in favor of renewed investigation of UFO's.

Lawrence Fawcett, a UFO investigator for twenty years, has held memberships in the National Investigations Committee on Aerial Phenomena (NICAP) and the Aerial Phenomena Research Organization (APRO) and has also served as the Early Warning coordinator in New England for the Air Force-sponsored "Condon Committee" UFO study. He has served on the National Board of Directors for the Center for UFO studies (CUFOS) and is the assistant director and chief investigator for Citizens Against UFO Secrecy (CAUS).
Loading...
or support indie stores by buying on