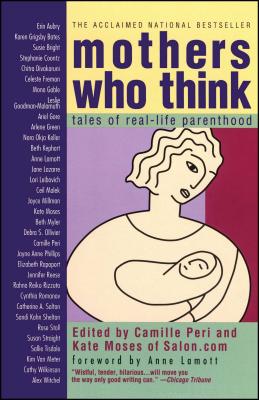 From the editors of Salon.com's cutting edge Web site, Mothers Who Think, comes an anthology of smart and lovely essays (Chicago Sun Times) -- provacative collection that challenges and changes our views of motherhood today.
Anne Lamott, Jayne Anne Phillips, Sallie Tisdale, Susan Straight, Jane Lazarre, Nora Okja Keller, Beth Kephart, Ariel Gore, Alex Witchel, and many other contemporary writers elevate the discussion of motherhood above the level of tantrum control and potty training. Irreverent, wistful, hilarious, fierce, and tender, these essays offer an unsparing look at the myths and realities, the serious and silly sides, the thankless and supremely satisfying aspects of being a mom -- and are a testament to the notion that motherhood gives women more to think about, not less.

Camille Peri is the editor of Mothers Who Think, the most popular feature in the online magazine Salon.com. Her work has appeared in the Los Angeles Times Magazine, Mother Jones, Parenting, Lear's, and Savvy.

Praise For Mothers Who Think: Tales of Reallife Parenthood…


Wistful, tender, hilarious...will move you the way only good writing can.


[These] essays...are not so much issues as personal truths, spun out with equal parts observation, honesty, and good humor. They are sad, and funny, and poignant, and real.


Finally, we who share the joy and the fury can share a book that embraces both and, unlike any other book on the subject, invites us to honor ourselves for simply doing the best we can.

Trade the parenthood guides in for this collection of provocative essays. I read most of them late at night on Salon, the Internet magazine, and revisited, they come alive again. The sheer intelligence and range of these mothers, from Jayne Anne Phillips to Sallie Tisdale and Alex Witchel, enlarge the world of motherhood.


This book is a lot like motherhood itself full of joy, trauma, insanity, hard work, exhaustion, and more than a few good laughs.


A must-read for anyone contemplating motherhood and a bible for all of us whose lives have been warped, splendored, and expanded by our dear little ones.


Most popular press articles on the joys and tribulations of mothering are mildly insulting. Good friends may share true feelings with you, but not the press. [The web site] "Mothers Who Think" is where you go when you realize you've been duped...Heartfelt, exuberant essays...Funny, straight-talking...


Full of dames both besotted and fed up...Essays by these mothers who think deal with the sweet, the sour, and the unthinkable.


Here, at last, is a parenting book for those of us who have made the desperate search for some literature (any literature!) that reflects our own intense, horrific, hilarious, joyful, maddening, bewildering, sublime experiences as mothers.