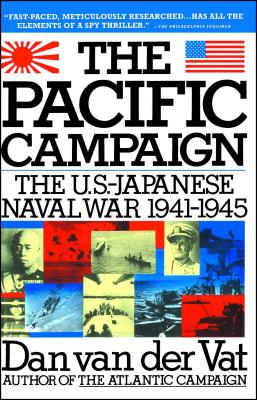 Dan van der Vat's naval histories have been acclaimed on both sides of the Atlantic as “definitive,” “extraordinary,” and “vivid and harrowing.”

Now he turns to the greatest naval conflict in history: the Pacific campaign of World War II. Drawing on neglected archives of firsthand accounts from both sides, van der Vat interweaves eyewitness testimony with sharp, analytical narration to provide a penetrating reappraisal of the strategic and political background of both the Japanese and American forces, as well as a major reassessment of the role of intelligence on both sides. A comprehensive evaluation of all aspects of the war in the Pacific, The Pacific Campaign promises to be the standard work on the U.S.-Japanese war for years to come.

The Philadelphia Inquirer Fast-paced, meticulously reserarched...has all the elements of a spy thriller.

The New York Times Book Review Belongs on the bookshelf of every American who contemplates the meaning of the greatest sea war in history.

Stephen E. Ambrose author of Eisenhower A vivid account of the greatest naval battles ever fought and a thoughtful analysis of why war came...marked by fresh insights and new material.

The Chicago Tribune An unsparing indictment of Japan's culpability in bringing about the Second World War....It blows away the rubbish....Van Der Vat writes with clarity and understanding.

Dan van der Vat is the author of The Atlantic Campaign, The Ship That Changed the World, Gentlemen of War, and The Grand Scuttle. He lives in London, England.
Loading...
or
Not Currently Available for Direct Purchase