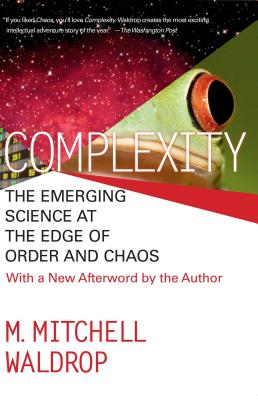 The Emerging Science at the Edge of Order and Chaos

Why did the stock market crash more than 500 points on a single Monday in 1987? Why do ancient species often remain stable in the fossil record for millions of years and then suddenly disappear? In a world where nice guys often finish last, why do humans value trust and cooperation? At first glance these questions don't appear to have anything in common, but in fact every one of these statements refers to a complex system. The science of complexity studies how single elements, such as a species or a stock, spontaneously organize into complicated structures like ecosystems and economies; stars become galaxies, and snowflakes avalanches almost as if these systems were obeying a hidden yearning for order.
Drawing from diverse fields, scientific luminaries such as Nobel Laureates Murray Gell-Mann and Kenneth Arrow are studying complexity at a think tank called The Santa Fe Institute. The revolutionary new discoveries researchers have made there could change the face of every science from biology to cosmology to economics. M. Mitchell Waldrop's groundbreaking bestseller takes readers into the hearts and minds of these scientists to tell the story behind this scientific revolution as it unfolds.

Praise For Complexity: The Emerging Science at the Edge of Order and Chaos…

The Washington Post If you liked Chaos, you'll love Complexity. Waldrop creates the most exciting intellectual adventure story of the year.

Heinz Pagels physicist I am convinced that the nations and people who master the new sciences of complexity will become the economic, cultural, and political superpowers of the next century.

The New York Times Book Review Lucidly shows physicists, biologists, computer scientists and economists swapping metaphors and reveling in the sense that epochal discoveries are just around the corner....[Waldrop] has a special talent for relaying the exhilaration of moments of intellectual insight.

Douglas R. Hofstadter author of Götel, Esther, Bach One comes away from Complexity both intellectually excited by ideas and emotionally involved with the people struggling to formulate them. This is a deep tale of science in the making.

M. Mitchell Waldrop has his doctorate in elementary particle physics and is the author of Man-Made Minds. He spent ten years as a senior writer for Science magazine, where he is now a contributing correspondent.
Loading...
or support indie stores by buying on