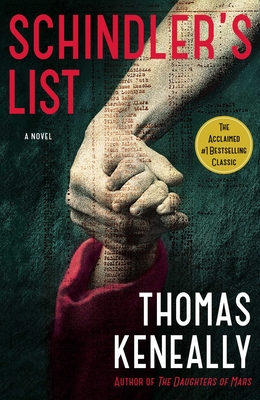 A stunning novel based on the true story of how German war profiteer and factory director Oskar Schindler came to save more Jews from the gas chambers than any other single person during World War II. In this milestone of Holocaust literature, Thomas Keneally, author of Daughter of Mars, uses the actual testimony of the Schindlerjuden—Schindler’s Jews—to brilliantly portray the courage and cunning of a good man in the midst of unspeakable evil.

"An extraordinary tale...no summary can adequately convey the strategems and reverses and sudden twists of fortune...A notable achievement."
— New York Review of Books

"An astounding story...in this case the truth is far more powerful than anything the imagination could invent."
— Newsweek

"A truly heroic story of the war and, like the tree planted in Oskar Schindler's honor in Jerusalem, a fitting memorial to the fight of one individual against the horror of Nazism."
— Simon Wiesenthal

Thomas Keneally began his writing career in 1964 and has published thirty-three novels since, most recently Crimes of the Father, Napoleon’s Last Island, Shame and the Captives, and the New York Times bestselling The Daughters of Mars. He is also the author of Schindler’s List, which won the Booker Prize in 1982, The Chant of Jimmie Blacksmith, Gossip from the Forest, and Confederates, all of which were shortlisted for the Booker Prize. He has also written several works of nonfiction, including his boyhood memoir Homebush Boy, The Commonwealth of Thieves, and Searching for Schindler. He is married with two daughters and lives in Sydney, Australia.
Loading...
or
Not Currently Available for Direct Purchase