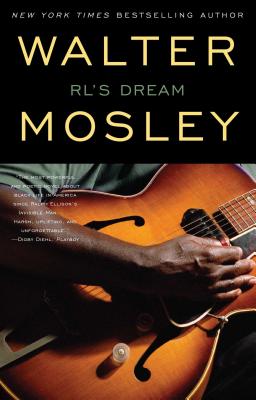 It’s 1939 and Easy and Mouse are young men just setting out in life—Easy has yet to develop his skill for unraveling the secrets of others, and Mouse has yet to kill his first man. But all that will soon change.

Soupspoon Wise is dying on the unforgiving streets of New York City, years and worlds away from the Mississippi delta, where he once jammed with blues legend Robert "RL" Johnson. It was an experience that burned indelibly into Soupspoon's soul—never mind that they said RL's gift came from the Devil himself. Now it's Soupspoon's turn to strike a deal with a stranger. An alcoholic angel of mercy, Kiki Waters isn't much better off than Soupspoon, but she too is a child of the South, and knows its pull. And she is determined to let Soupspoon ride out the final notes of his haunting blues dream, to pour out the remarkable tale of what he's seen, where he's been—and where he's going.

Mosley creates a “a meditation on the history and meaning of the blues” (Entertainment Weekly) in R L’s Dream, which practically sings a soulful blues song itself.

"Heart-stopping....a beautiful little masterpiece....a meditation on the history and meaning of the blues and, in its sorrowful lyric, virtually a blues song itself....Every part of this novel -- every page -- comes alive."
— Entertainment Weekly

"Fans of Mosley's Easy Rawlins series will not be disappointed by RL's Dream....Mosley's sense of timing and mystery is as powerful as ever....Mosley is a master storyteller, and in RL's Dream the blues are real."
— Chicago Tribune

Walter Mosley is the acclaimed author of forty-three books, including the internationally bestselling Easy Rawlins series. His best known Easy Rawlins novels include Devil in a Blue Dress, A Red Death, White Butterfly, Black Betty, and Little Yellow Dog. He is also the author of the collection of stories Always Outnumbered. Always Outgunned featuring Socrates Fortlow, which was the basis for an HBO feature film. A former president of the Mystery Writers of America, he was named a grand master by the organization in 2016. He has served on the board of directors of the National Book Foundation and is a recipient of the PEN American Center Lifetime Achievement Award. A native of Los Angeles, he now lives in New York City.
Loading...
or support indie stores by buying on