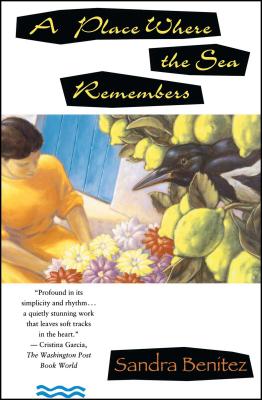 Place Where the Sea Remembers (Paperback)

Finalist for the Los Angeles Times book award and winner of the Minnesota Book Award, A Place Where the Sea Remembers is a timeless classic, a mesmerizing world filled with love, betrayal, tragedy, and hope.

This rich and bewitching story is a bittersweet portrait of the people in Santiago, a Mexican village by the sea. Chayo, the flower seller, and her husband Candelario, the salad maker, are finally blessed with the child they thought they would never have. Their cause for happiness, however, triggers a chain of events that impact the lives of everyone in their world.

The hopes, triumphs, failures, and shortcomings of the novel’s enchanting array of characters create a graceful picture of life that is both a universal portrait and an insider’s look at life in Latin America.

Puerto Rican mother and the Anglo-American culture of my father.

identical twins. My sister died only a month after our birth. A year

later my parents and I moved to Mexico where another sister was born.

My childhood and early adulthood were spent in Mexico and El Salvador.

When I think of those years, the images that come to me are awash in

the color saffron: the Spanish language, the permeable scent of cedar

and leather, the shimmering heat, the color of the women in the household,

the stories they told, the lives they shared.

"In Latin America, I learned that life is frail and most

always capricious, that people find joy in the midst of insurmountable

obstacles, that in the end, it is hope that saves us.

"When I became a teenager, I was sent to live for three

years on my paternal grandparents' farm in Northeastern

Missouri, and this is where I attended high school. I was the first

Latina the people there had ever known. Those years live for me

in a pale blue light: the thin sheen the setting sun casts on the

snow banks, the color of my father's eyes, the doleful bawl a cow

makes when it has lost its calf, the back-breaking work that is the

"In Missouri, I learned that life is what you make it, and

that satisfaction comes with a job well done, that in the end,

it is steadfastness that saves us."

"I received my undergraduate and master's degrees from

Northeast Missouri State University. Over the years I have been

an English, Spanish, and Literature teacher at both high school

and university levels. I have been a translator, and I have worked

in the international division of a major training corporation. I

have traveled extensively throughout Latin America. Since 1980,

I have been a fiction writer and a creative writing teacher. I have

two grown sons and I live with my husband in Minnesota."

"I came to writing late. I was thirty-nine before I gathered

enough courage to begin. When I hear other writers talk about

writing, I'm amazed by those who say they always knew they had

to write. When I was a girl, I never wished to do it. Being a writer

was something magical I never dreamed I could attain. But while

growing up, I frequently had a book in my lap -- and so I was

linked even then to writing and to the spell that stories cast. I

didn't know a writing life was lying in store for me. I had to live

and grow before I caught the faint call. Since heeding the call,

I've worked hard at being faithful to it, for writing is an act of

faith. We must keep faith each day with our writing if we want to

"Since I've been writing I've searched what's in my heart

marketable. I am a Latina American. In my heart are stored the

stories of my Latin American and Missourian heritage -- of a

childhood lived in Mexico and El Salvador. When I write, I have to

the stories of 'the other America.' Over the years, I've learned to

write from the heart, to persevere despite the setbacks of a host

"In the end, I've learned these things about writing: its

never too late to begin; we know all we need to know in order to

do it; persistence and tenacity will take us all the way. There are

angels on our shoulders, be still to catch their whisperings."

Other Books With Reading Group Guides

Praise For Place Where the Sea Remembers…

"Profound in its simplicity and rhythm . . . a quietly stunning work that leaves soft tracks in the heart."
—Cristina García, The Washington Post Book World
or support indie stores by buying on
Copyright © 2020 American Booksellers Association