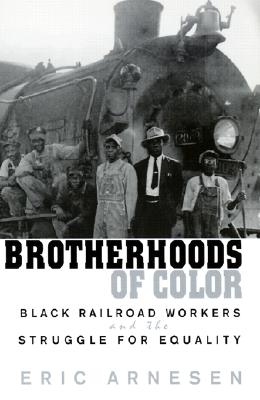 Black Railroad Workers and the Struggle for Equality

From the time the first tracks were laid in the early nineteenth century, the railroad has occupied a crucial place in America's historical imagination. Now, for the first time, Eric Arnesen gives us an untold piece of that vital American institution--the story of African Americans on the railroad.

African Americans have been a part of the railroad from its inception, but today they are largely remembered as Pullman porters and track layers. The real history is far richer, a tale of endless struggle, perseverance, and partial victory. In a sweeping narrative, Arnesen re-creates the heroic efforts by black locomotive firemen, brakemen, porters, dining car waiters, and redcaps to fight a pervasive system of racism and job discrimination fostered by their employers, white co-workers, and the unions that legally represented them even while barring them from membership.

Decades before the rise of the modern civil rights movement in the mid-1950s, black railroaders forged their own brand of civil rights activism, organizing their own associations, challenging white trade unions, and pursuing legal redress through state and federal courts. In recapturing black railroaders' voices, aspirations, and challenges, Arnesen helps to recast the history of black protest and American labor in the twentieth century.