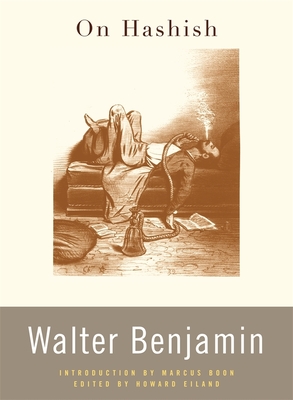 Walter Benjamin's posthumously published collection of writings on hashish is a detailed blueprint for a book that was never written--a "truly exceptional book about hashish," as Benjamin describes it in a letter to his friend Gershom Scholem. A series of "protocols of drug experiments," written by himself and his co-participants between 1927 and 1934, together with short prose pieces that he published during his lifetime, On Hashish provides a peculiarly intimate portrait of Benjamin, venturesome as ever at the end of the Weimar Republic, and of his unique form of thought.

Consciously placing himself in a tradition of literary drug-connoisseurs from Baudelaire to Hermann Hesse, Benjamin looked to hashish and other drugs for an initiation into what he called "profane illumination." At issue here, as everywhere in Benjamin's work, is a new way of seeing, a new connection to the ordinary world. Under the influence of hashish, as time and space become inseparable, experiences become subtly stratified and resonant: we inhabit more than one plane in time. What Benjamin, in his contemporaneous study of Surrealism, calls "image space" comes vividly to life in this philosophical immersion in the sensuous.

This English-language edition of On Hashish features a section of supplementary materials--drawn from Benjamin's essays, letters, and sketches--relating to hashish use, as well as a reminiscence by his friend Jean Selz, which concerns a night of opium-smoking in Ibiza. A preface by Howard Eiland discusses the leading motifs of Benjamin's reflections on intoxication.