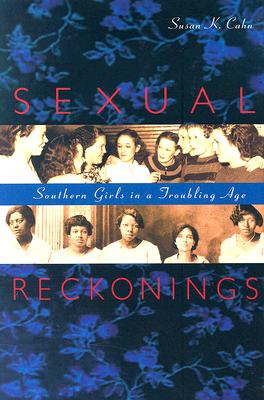 Southern Girls in a Troubling Age

"Sexual Reckonings" is the fascinating tale of adolescent girls coming of age in the South during the most explosive decades for the region. Focusing on the period from 1920 to 1960, Susan Cahn reveals how both the life of the South and the meaning of adolescence underwent enormous political, economic, and social shifts. Those years witnessed the birth of a modern awareness of adolescence and female sexuality that clashed mightily with the white supremacist and patriarchal legacies of the old South. As youth staked its claim, the bodies and beliefs of southern girls became the battlefield for a transformed South, which was, like them, experiencing growing pains.

Cahn reveals how young women, both white and black, were seen as the South's greatest hope and its greatest threat. Viewed as critical actors in every regional crisis, from the economic recession and urban migrations of the 1920s to the racial conflicts precipitated by school desegregation in the 1950s, female teenagers became the conspicuous subjects of social policy and regional imagination. All the while, these adolescents pursued their own desires and discovered their own meanings, creating cracks in the twin pillars of the Jim Crow South--"racial purity" and white male dominance--that would soon be toppled by the student-led civil rights movement.

"Sexual Reckonings" is an amazingly intimate look at a time of deep personal exploration and profound cultural change for southern girls and for the society they inhabited, a powerful account of the clash between a society's fears and the daily lives and aspirations of its most prized, and unpredictable, population.