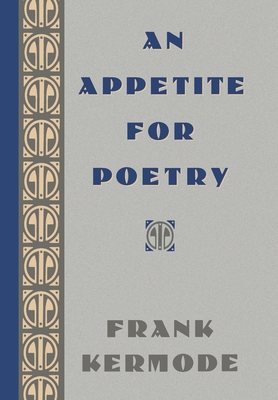 An Appetite for Poetry (Hardcover)

Frank Kermode is the preeminent practitioner of the art of criticism in the English-speaking world. As such his task entails the readiness to evaluate in general terms the widest range of texts, both ancient and modern, and also the ability to make public sense of the seemingly arcane debates about theories of literature as they pertain to the ongoing process of evaluation. It has been Kermode's distinction to make a virtue--as all the best critics have done--of the necessarily occasional nature of his profession. That virtue is evident in every page of this set of essays.

This is a book in which Kermode asks the reader to share his pleasure in the literature of a set of major writers--Milton, Eliot, Stevens. He vividly evokes Milton after the Restoration of Charles II, with a fine speculative discussion of the interplay between his personal and political circumstances and the preoccupations of his poetry. He sets before us T. S. Eliot living in a condition of permanent exile, Wallace Stevens in his old age dwelling poetically in Connecticut, and author/critic William Empson, whose singular career was marked by both the pleasure of the text and the delight in conceptual issues that characterizes so much of the contemporary taste for theory. Other essays draw our attention to debates on the literary canon and problems of biblical criticism and their implications for the study of narrative in particular and the interpretation of secular literary texts in general.

These are professional essays that nevertheless defy the excesses of modern professionalism. Nowhere is this more evident than in the polemical Prologue to the book, in which Kermode sorts out the good from the meretricious in contemporary criticism. He argues that some proclaimed theorists "seem largely to have lost interest in literature," while the best, like Paul de Man and Jacques Derrida, have never lost what Kermode prizes most highly, the very appetite or hunger for poetry and literature. Always readable, elegant even on gnarled matters, and courteous in contexts where others are bad-tempered, An Appetite for Poetry is the work of one of the most distinguished minds of our time. In reaffirming the professional responsibilities of criticism now being neglected, it displays a generous hospitality to new ideas.