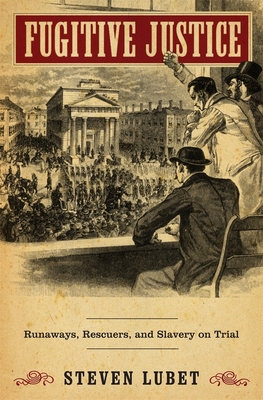 Runaways, Rescuers, and Slavery on Trial

During the tumultuous decade before the Civil War, no issue was more divisive than the pursuit and return of fugitive slaves--a practice enforced under the Fugitive Slave Act of 1850. When free Blacks and their abolitionist allies intervened, prosecutions and trials inevitably followed. These cases involved high legal, political, and--most of all--human drama, with runaways desperate for freedom, their defenders seeking recourse to a "higher law" and normally fair-minded judges (even some opposed to slavery) considering the disposition of human beings as property.

Fugitive Justice tells the stories of three of the most dramatic fugitive slave trials of the 1850s, bringing to vivid life the determination of the fugitives, the radical tactics of their rescuers, the brutal doggedness of the slavehunters, and the tortuous response of the federal courts. These cases underscore the crucial role that runaway slaves played in building the tensions that led to the Civil War, and they show us how "civil disobedience" developed as a legal defense. As they unfold we can also see how such trials--whether of rescuers or of the slaves themselves--helped build the northern anti-slavery movement, even as they pushed southern firebrands closer to secession. How could something so evil be treated so routinely by just men? The answer says much about how deeply the institution of slavery had penetrated American life even in free states. Fugitive Justice powerfully illuminates this painful episode in American history, and its role in the nation's inexorable march to war.