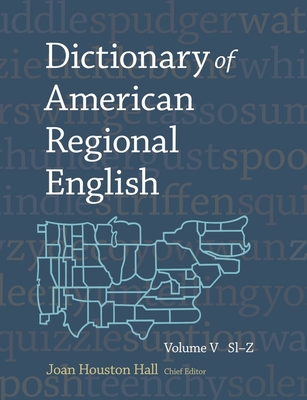 With this fifth volume of the Dictionary of American Regional English, readers now have the full panoply of American regional vocabulary, from Adam's housecat to Zydeco. Like the first four volumes, the fifth is filled with words that reflect our origins, migrations, ethnicities, and neighborhoods.

Contradicting the popular notion that American English has become homogenized, DARE demonstrates that our language still has distinct and delightful local character. If a person lives in a remote place, would you say he's from the boondocks? Or from the puckerbrush, the tules, or the willywags? Where are you likely to live if you eat Brunswick stew rather than jambalaya, stack cake, smearcase, or kringle? What's your likely background if your favorite card game is hasenpfeffer? bid whist? sheepshead? Whether we are talking about foods, games, clothing, family members, animals, or almost any other aspect of life, our vocabulary reveals much about who we are.

Each entry in DARE has been carefully researched to provide as complete a history of its life in America as possible. Illustrative citations extend from the seventeenth century through the twenty-first. More than 600 maps show where words were collected by the DARE fieldworkers. And quotations highlight the wit and wisdom of American speakers and writers. Recognized as the authoritative record of American English, DARE serves scholars and professionals of all stripes. It also holds treasures for readers who simply love our language.

Joan Houston Hall is Senior Scientist at the University of Wisconsin, Madison. She joined the DARE staff in 1975, became Associate Editor in 1979, and was named Chief Editor in 2000. Author's Home: Madison, WI
Loading...
or
Not Currently Available for Direct Purchase