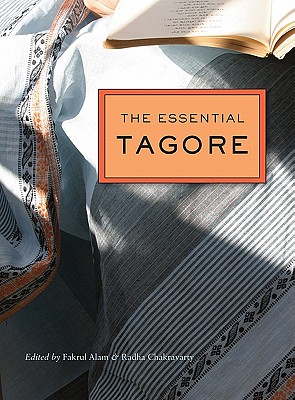 "The Essential Tagore "showcases the genius of India's Rabindranath Tagore, the first Asian Nobel Laureate and possibly the most prolific and diverse serious writer the world has ever known.

Marking the 150th anniversary of Tagore's birth, this ambitious collection the largest single volume of his work available in English attempts to represent his extraordinary achievements in ten genres: poetry, songs, autobiographical works, letters, travel writings, prose, novels, short stories, humorous pieces, and plays. In addition to the newest translations in the modern idiom, it includes a sampling of works originally composed in English, his translations of his own works, three poems omitted from the published version of the English "Gitanjali," and examples of his artwork.

Tagore's writings are notable for their variety and innovation. His "Sonar Tari" signaled a distinctive turn toward the symbolic in Bengali poetry. The Lord of Life, from his collection "Chitra," created controversy around his very personal concept of religion. "Chokher Bali" marked a decisive moment in the history of the Bengali novel because of the way it delved into the minds of men and women. The skits in "Vyangakautuk" mocked upper-class pretensions. Prose pieces such as The Problem and the Cure were lauded by nationalists, who also sang Tagore's patriotic songs.

Translations for this volume were contributed by Tagore specialists and writers of international stature, including Amitav Ghosh, Amit Chaudhuri, and Sunetra Gupta.