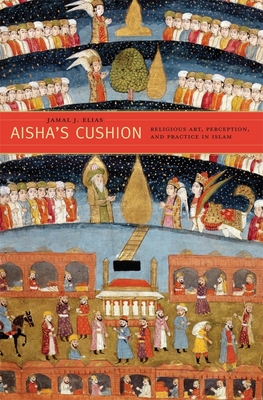 Media coverage of the Danish cartoon crisis and the destruction of the Buddhas of Bamiyan left Westerners with a strong impression that Islam does not countenance depiction of religious imagery. Jamal J. Elias corrects this view by revealing the complexity of Islamic attitudes toward representational religious art. Aisha's Cushion emphasizes Islam's perceptual and intellectual modes and in so doing offers the reader both insight into Islamic visual culture and a unique way of seeing the world.

Aisha's Cushion evaluates the controversies surrounding blasphemy and iconoclasm by exploring Islamic societies at the time of Muhammad and the birth of Islam; during early contact between Arab Muslims and Byzantine Christians; in medieval Anatolia and India; and in modern times. Elias's inquiry then goes further, to situate Islamic religious art in a global context. His comparisons with Christian, Jewish, Buddhist, and Hindu attitudes toward religious art show them to be as contradictory as those of Islam. Contemporary theories about art's place in society inform Elias's investigation of how religious objects have been understood across time and in different cultures.

Elias contends that Islamic perspectives on representation and perception should be sought not only in theological writings or aesthetic treatises but in a range of Islamic works in areas as diverse as optics, alchemy, dreaming, calligraphy, literature, vehicle and home decoration, and Sufi metaphysics. Unearthing shades of meaning in Islamic thought throughout history, Elias offers fresh insight into the relations among religion, art, and perception across a broad range of cultures.

Jamal J. Elias is Class of 1965 Term Professor of Religious Studies at the University of Pennsylvania.
or
Not Currently Available for Direct Purchase
Copyright © 2020 American Booksellers Association