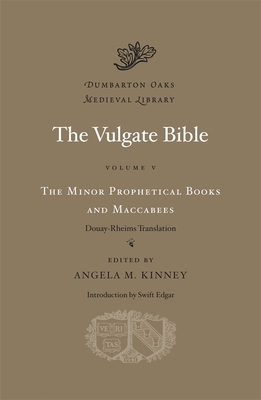 This is the fifth volume of a projected six-volume Vulgate Bible. Compiled and translated in large part by Saint Jerome at the turn of the fifth century ce, the Vulgate Bible permeated the Western Christian tradition through the twentieth century. It influenced literature, art, music, and education, and its contents lay at the heart of Western theological, intellectual, artistic, and political history through the Renaissance. At the end of the sixteenth century, professors at a Catholic college first at Douay, then at Rheims, translated the Vulgate Bible into English to combat the influence of Protestant vernacular Bibles.

Volume V presents the twelve minor prophetical books of the Old Testament, as well as two deuterocanonical books, 1 and 2 Maccabees. While Jewish communities regarded the works of the twelve minor prophets as a single unit (the Dodecapropheton), the Vulgate Bible treats them individually in accordance with Christian tradition. The themes of judgment and redemption featured prominently in the major prophets (Volume IV) are further developed by the minor prophets. The books of 1 and 2 Maccabees conclude the volume. Their doctrinal controversies and highly influential martyrdom narratives anticipate the development of Christian hagiography both as a genre and as a theological vehicle.

Angela M. Kinney is a doctoral candidate at the University of Illinois at Urbana-Champaign and research associate at Dumbarton Oaks Research Library and Collection.
or
Not Currently Available for Direct Purchase
Copyright © 2020 American Booksellers Association