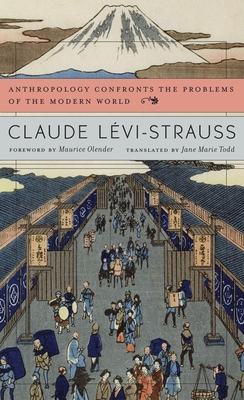 Anthropology Confronts the Problems of the Modern World (Hardcover)

Anthropology Confronts the Problems of the Modern World is the first English translation of a series of lectures Claude L vi-Strauss delivered in Tokyo in 1986. Written with an eye toward the future as his own distinguished career was drawing to a close, this volume presents a synthesis of the author's major ideas about structural anthropology, a field he helped establish. Critiquing insights of his earlier writings on the relationship between race, history, and civilization, L vi-Strauss revisits the social issues that never ceased to fascinate him.

He begins with the observation that the cultural supremacy enjoyed by the West for over two centuries is at an end. Global wars and genocides in the twentieth century have fatally undermined Western faith in humanity's improvement through scientific progress. Anthropology, however, can be the vehicle of a new "democratic humanism," broadening traditional frameworks that have restricted cross-cultural understandings of the human condition, and providing a basis for inquiries into what other civilizations, such as those of Asia, can teach.

Surveying a world on the brink of the twenty-first century, L vi-Strauss assesses some of the dilemmas of cultural and moral relativism a globalized society faces--ethical dimensions of economic inequality, the rise of different forms of religious fundamentalism, the promise and peril of genetic and reproductive engineering. A laboratory of thought opening onto the future, Anthropology Confronts the Problems of the Modern World is an important addition to the canon of one of the twentieth-century's most influential theorists.

Claude Levi-Strauss was chair of the Department of Social Anthropology at the College de France, 1959-1982.
or
Not Currently Available for Direct Purchase
Copyright © 2020 American Booksellers Association