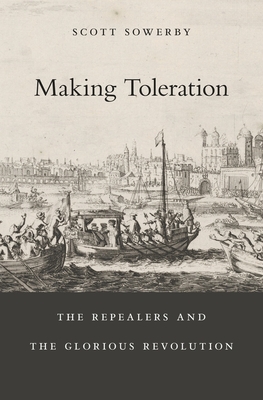 The Repealers and the Glorious Revolution (Harvard Historical Studies #181)

In the reign of James II, minority groups from across the religious spectrum, led by the Quaker William Penn, rallied together under the Catholic King James in an effort to bring religious toleration to England. Known as repealers, these reformers aimed to convince Parliament to repeal laws that penalized worshippers who failed to conform to the doctrines of the Church of England. Although the movement was destroyed by the Glorious Revolution, it profoundly influenced the post-revolutionary settlement, helping to develop the ideals of tolerance that would define the European Enlightenment.

Based on a rich array of newly discovered archival sources, Scott Sowerby's groundbreaking history rescues the repealers from undeserved obscurity, telling the forgotten story of men and women who stood up for their beliefs at a formative moment in British history. By restoring the repealer movement to its rightful prominence, Making Toleration also overturns traditional interpretations of King James II's reign and the origins of the Glorious Revolution. Though often depicted as a despot who sought to impose his own Catholic faith on a Protestant people, James is revealed as a man ahead of his time, a king who pressed for religious toleration at the expense of his throne. The Glorious Revolution, Sowerby finds, was not primarily a crisis provoked by political repression. It was, in fact, a conservative counter-revolution against the movement for enlightened reform that James himself encouraged and sustained.