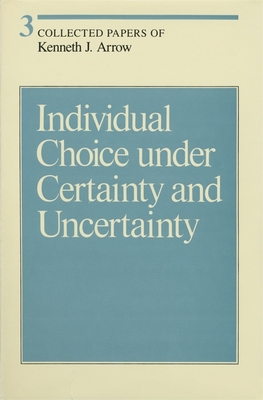 Unlike the papers of some other great economists, those of Kenneth Arrow are being read and studied today with even greater care and attention than when they first appeared in the journals. The publication of his collected papers will therefore be welcomed by economists and other social scientists and in particular by graduate students, who can draw from them the deep knowledge and the discernment in selection of scientific problems that only a master can offer. The author has added headnotes to certain well-known papers, describing how he came to write them.

The third volume of Kenneth Arrow's Collected Papers concerns the basic concept of rationality as it applies to an economic decision maker. In particular, it addresses the problem of choice faced by consumers in a multicommodity world and presents specific models of choice useful in economic analysis. It also discusses choice models under uncertainty, giving the basic theory and critiques of this theory based on experimental evidence and applications. Among the major papers are "Alternative Approaches to the Theory of Choice in Risk-Taking Situations," a masterly survey of subjective probability and choice theory, and "The Theory of Risk Aversion," an exposition of the theory of choice under uncertainty.