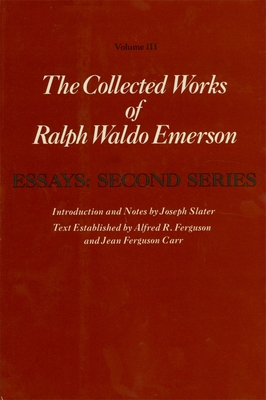 Emerson's second collection of essays appeared in 1844, when he was forty-one. It includes eight essays--"The Poet," "Experience," "Character," "Manners," "Gifts," "Nature," "Politics," and "Nominalist and Realist"--and one address, the much misunderstood "New England Reformers." Essays: Second Series has a lightness of tone and an irony absent from the earlier writings, but it is no less memorable: "a sermon to me," Carlyle wrote, "a real word."

The present edition, drawing on the vast body of Emerson scholarship of the last forty years, incorporates all the textual changes Emerson made or demonstrably intended to make after 1844. It records variant wordings and recounts the development of the text before and after publication. A list of parallel passages makes it possible to trace Emerson's extensive use of material from his journals, notebooks, and lectures. Endnotes provide information about people, events, and now-obscure terms. A brief historical introduction places the book in the context of the years during which it was written, the time of Brook Farm, The Dial, and the death of Emerson's five year-old son.