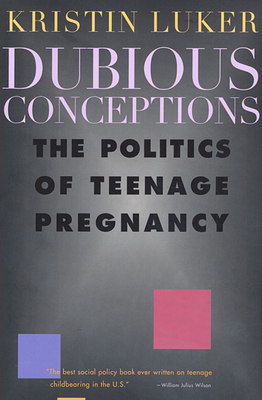 The Politics of Teenage Pregnancy

As her little boy plays at a day care center across the street, Michelle, an unmarried teenager, is in algebra class, hoping to be the first member of her family to graduate from high school. Will motherhood make this young woman poorer? Will it make the United States poorer as a nation? That's what the voices raised against "babies having babies" would have us think, and what many Americans seem inclined to believe. This powerful book takes us behind the stereotypes, the inflamed rhetoric, and the flip media sound bites to show us the complex reality and troubling truths of teenage mothers in America today.

Would it surprise you to learn that Michelle is more likely to be white than African American? That she is most likely eighteen or nineteen--a legal adult? That teenage mothers are no more common today than in 1900? That two-thirds of them have been impregnated by men older than twenty? Kristin Luker, author of the acclaimed Abortion and the Politics of Motherhood, puts to rest once and for all some very popular misconceptions about unwed mothers from colonial times to the present. She traces the way popular attitudes came to demonize young mothers and examines the profound social and economic changes that have influenced debate on the issue, especially since the 1970s. In the early twentieth century, reformers focused people's attention on the social ills that led unmarried teenagers to become pregnant; today, society has come almost full circle, pinning social ills on sexually irresponsible teens.

Dubious Conceptions introduces us to the young women who are the object of so much opprobrium. In these pages we hear teenage mothers from across the country talk about their lives, their trials, and their attempts to find meaning in motherhood. The book also gives a human face to those who criticize them, and shows us why public anger has settled on one of society's most vulnerable groups. Sensitive to the fears and confusion that fuel this anger, and to the troubled future that teenage mothers and their children face, Luker makes very clear what we as a nation risk by not recognizing teenage pregnancy for what it is: a symptom, not a cause, of poverty.