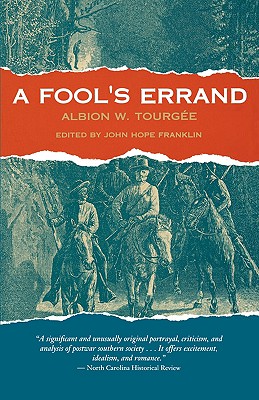 What was a carpetbagger? Albion W. Tourg e was called one, and he wrote, "To the southern mind it meant a scion of the North, a son of an 'abolitionist, ' a creature of the conqueror, a witness to their defeat, a mark of their degradation: to them he was hateful, because he recalled all of evil or of shame they had ever known ... To the Northern mind, however, the word had no vicarious significance. To their apprehension, the hatred was purely personal, and without regard to race or nativity. They thought (foolish creatures ) that it was meant to apply solely to those, who, without any visible means of support, lingering in the wake of a victorious army, preyed upon the conquered people."

Tourg e's novel, originally published in 1879 anonymously as A Fool's Errand, By One of the Fools, is not strictly autobiographical, though it draws on Tourg e's own experiences in the South. In the story Comfort Servosse, a Northerner of French ancestry, moves to a Southern state for his health and in the hope of making his fortune. These were also Tourg e's motives for moving South. Servosse is caught up in a variety of experiences that make apparent the deep misunderstanding between North and South, and expresses opinions on the South's intolerance, the treatment of the Negro, Reconstruction, and other issues that probably are the opinions of Tourg e himself. "Reconstruction was a failure," he said, "so far as it attempted to unify the nation, to make one people in fact of what had been one only in name before the convulsion of Civil War. It was a failure, too, so far as it attempted to fix and secure the position and rights of the colored race." Though the discussion of sectional and racial problems is an important element in the book, A Fool's Errand has merit as a dramatic narrative--with its love affair, and its moments of pathos, suffering, and tragedy. This combination of tract and melodrama made it a bestseller in its day. Total sales have been estimated as 200,000, a remarkable record in the l880's for a book of this kind. Though Tourg e later disavowed his early optimism about the role national education could play in remedying the race problem in the South, calling this a "genuine fool's notion," he might have been less pessimistic had he been alive in 1960, when the student sit-in movement began in the South. At any rate, today in what has been called the second phase of the modern revolution in race relations in this country, Tourg e's novel about the first phase has an added relevance and interest for thinking American readers.