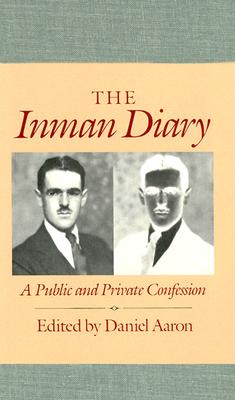 A Public and Private Confession

Between 1919 and his death by suicide in 1963, Arthur Crew Inman wrote what is surely one of the fullest diaries ever kept by any American. Convinced that his bid for immortality required complete candor, he held nothing back. This abridgment of the original 155 volumes is at once autobiography, social chronicle, and an apologia addressed to unborn readers.

Into this fascinating record Inman poured memories of a privileged Atlanta childhood, disastrous prep-school years, a nervous collapse in college followed by a bizarre life of self-diagnosed invalidism. Confined to a darkened room in his Boston apartment, he lived vicariously: through newspaper advertisements he hired "talkers" to tell him the stories of their lives, and he wove their strange histories into the diary. Young women in particular fascinated him. He studied their moods, bought them clothes, fondled them, and counseled them on their love affairs. His marriage in 1923 to Evelyn Yates, the heroine of the diary, survived a series of melodramatic episodes. While reflecting on national politics, waifs and revolutions, Inman speaks directly about his fears, compulsions, fantasies, and nightmares, coaxing the reader into intimacy with him. Despite his shocking self-disclosures he emerges as an oddly impressive figure.

This compelling work is many things: a case history of a deeply troubled man; the story of a transplanted and self-conscious southerner; a historical overview of Boston illuminated with striking cityscapes; an odd sort of American social history. But chiefly it is, as Inman himself came to see, a gigantic nonfiction novel, a new literary form. As it moves inexorably toward a powerful denouement, The Inman Diary is an addictive narrative.