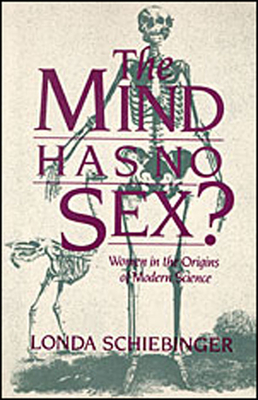 The Mind Has No Sex?

Women in the Origins of Modern Science

As part of his attempt to secure a place for women in scientific culture, the Cartesian Fran ois Poullain de la Barre asserted as long ago as 1673 that "the mind has no sex." In this rich and comprehensive history of women's contributions to the development of early modern science, Londa Schiebinger examines the shifting fortunes of male and female equality in the sphere of the intellect. Schiebinger counters the "great women" mode of history and calls attention to broader developments in scientific culture that have been obscured by time and changing circumstance. She also elucidates a larger issue: how gender structures knowledge and power.

It is often assumed that women were automatically excluded from participation in the scientific revolution of early modern Europe, but in fact powerful trends encouraged their involvement. Aristocratic women participated in the learned discourse of the Renaissance court and dominated the informal salons that proliferated in seventeenth-century Paris. In Germany, women of the artisan class pursued research in fields such as astronomy and entomology. These and other women fought to renegotiate gender boundaries within the newly established scientific academies in order to secure their place among the men of science. But for women the promises of the Enlightenment were not to be fulfilled. Scientific and social upheavals not only left women on the sidelines but also brought about what the author calls the "scientific revolution in views of sexual difference."

While many aspects of the scientific revolution are well understood, what has not generally been recognized is that revolution came also from another quarter--the scientific understanding of biological sex and sexual temperament (what we today call gender). Illustrations of female skeletons of the ideal woman--with small skulls and large pelvises--portrayed female nature as a virtue in the private realm of hearth and home, but as a handicap in the world of science. At the same time, seventeenth- and eighteenth-century women witnessed the erosion of their own spheres of influence. Midwifery and medical cookery were gradually subsumed into the newly profess ionalized medical sciences. Scientia, the ancient female personification of science, lost ground to a newer image of the male researcher, efficient and solitary--a development that reflected a deeper intellectual shift. By the late eighteenth century, a self-reinforcing system had emerged that rendered invisible the inequalities women suffered. In reexamining the origins of modern science, Schiebinger unearths a forgotten heritage of women scientists and probes the cultural and historical forces that continue to shape the course of scientific scholarship and knowledge.