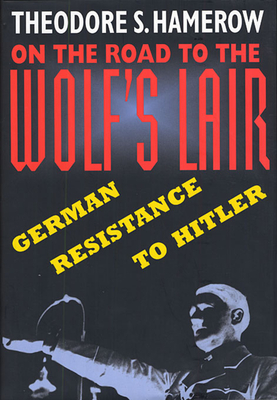 On the Road to the Wolfus Lair (Paperback)

In the beginning, they rallied behind Hitler in the national interest of Germany; in the end, they sacrificed their lives to assassinate him. A history of German resistance to Hitler in high places, this book offers a glimpse into one of the most intractable mysteries. Why did high-ranking army officers, civil servants, and religious leaders support Hitler? Why did they ultimately turn against him? What transformed these unlikely men, most of them elitist, militaristic, and fiercely nationalistic, into martyrs to a universal ideal?

The resisters in On the Road to the Wolf's Lair are not the singular souls doomed to failure by the massive Nazi machinery, but those who emerged from the Third Reich itself--those people whose cultural, administrative, and military positions allowed them, ultimately, to form a systematic, organized opposition to the Nazi regime. These were people with a vested interest in the Third Reich, and their slow and painful awakening to its evils makes a dramatic story, marked as much by temporizing and compromise, vacillation and reluctance--a resistance to conscience--as by the intrigue and heroics of political resistance that finally emerged. Hamerow follows these men as, one by one, they find themselves overwhelmed by guilt and contrition over their support of a murderous regime. He shows how their awakened moral reckonings and higher interests overrode lifetime habits and disciplines on the road to "the wolf's lair."

The result is an unsparing history of the German resistance to Hitler--one where the players emerge for the first time as real people with complex motives and evolving characters. Almost a history of the possibility of an emerging collective moral conscience within a destructive environment, the book adds to our understanding of the fall of the Third Reich and of the task of history itself.