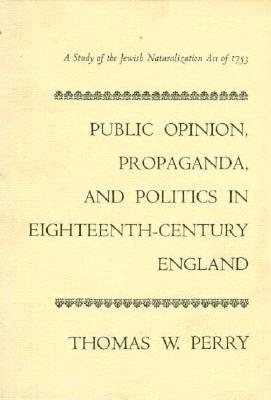 In 1753, at the request of the London Jewish community, the Peiham administration passed an act repealing the religious test that prevented Jewish aliens from being naturalized. This act, formally known as the Jewish Naturalization Act, was of negligible practical importance, but political opponents exploited the issue for an upcoming election campaign. The "Jew Bill" became a battle cry that swept across England. The Peiham administration, sensing the political damage that could be caused by the bill, bowed to the clamor and then took the initiative in defeating its own act.

This book is the first thorough account of that notorious but little-understood episode in English history. Using a largely narrative form the author first discusses the position of the Jews in the mid-eighteenth century and explains why they sought and obtained passage of the bill. He then recounts the beginnings of opposition to it and discusses the religious, economic, political, and psychological reasons for the opposition. He describes in detail the propaganda campaign against the bill and the resultant effect on the election.

The author concludes that this was not an isolated explosion of anti-Semitism, but rather a renewal of a long-standing debate over general naturalization policy. He further concludes that Parliament was more sensitive to public opinion than is generally supposed and that the terms "Whig supremacy" or "trusteeship" are not entirely accurate.

The reader will find that this study reveals much of the English political system of that era: the style and structure of parliamentary politics and electioneering; religious attitudes and economic notions; and the methods and ethical and intellectual standards of journalism and political propaganda.