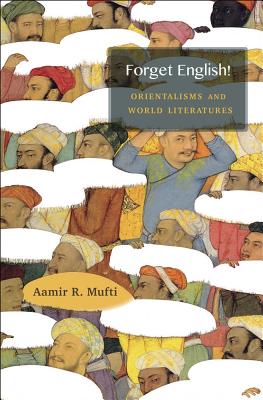 The idea of world literature has garnered much attention recently as a discipline that promises to move humanistic study beyond postcolonial theory and antiquated paradigms of "national" literary traditions. In Forget English Aamir Mufti scrutinizes the claims made on behalf of world literature by its advocates. The notion of a borderless, egalitarian global literature has obvious appeal, he notes, but behind it lurks the continuing dominance of English as a literary language and a cultural system of international reach.

The cultural logic of what Edward Said identified as Orientalism continues to structure world literature discourse, Mufti says--although in updated ways that conceal the persistence of the continental and civilizational inequalities of the colonial past. From the beginning, world literature has been an eminently Orientalist idea, one made possible by the translation labors of European Orientalist scholars and the canonizing of Orientalist concepts of cultural difference.

World literature has always been a border regime, an implicit set of regulations governing the mobility of various national and local literatures across the world. Mufti explores how English historically achieved its literary preeminence, and he deepens our understanding of how the hegemony of English affects non-European languages--particularly those of India and South Asia--as vessels of literary expression. At the center of the very possibility of world literature is the dominance of English, as both a literary vernacular and the undisputed language of global capitalism.