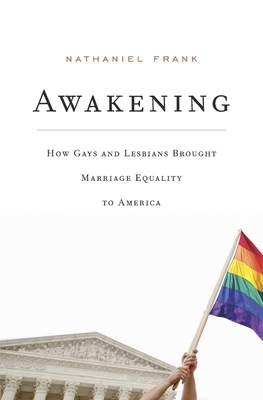 How Gays and Lesbians Brought Marriage Equality to America

The right of same-sex couples to marry provoked decades of intense conflict before it was upheld by the U.S. Supreme Court in 2015. Yet some of the most divisive contests shaping the quest for marriage equality occurred not on the culture-war front lines but within the ranks of LGBTQ advocates. Nathaniel Frank tells the dramatic story of how an idea that once seemed unfathomable--and for many gays and lesbians undesirable--became a legal and moral right in just half a century.

Awakening begins in the 1950s, when millions of gays and lesbians were afraid to come out, let alone fight for equality. Across the social upheavals of the next two decades, a gay rights movement emerged with the rising awareness of the equal dignity of same-sex love. A cadre of LGBTQ lawyers soon began to focus on legal recognition for same-sex couples, if not yet on marriage itself. It was only after being pushed by a small set of committed lawyers and grassroots activists that established movement groups created a successful strategy to win marriage in the courts. Marriage equality proponents then had to win over members of their own LGBTQ community who declined to make marriage a priority, while seeking to rein in others who charged ahead heedless of their carefully laid plans. All the while, they had to fight against virulent antigay opponents and capture the American center by spreading the simple message that love is love, ultimately propelling the LGBTQ community--and America--immeasurably closer to justice.