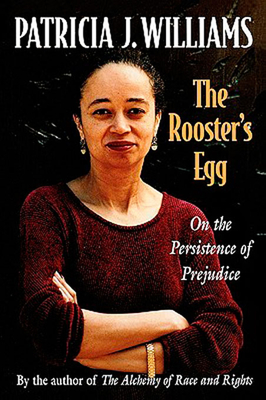 Jamaica is the land where the rooster lays an egg...When a Jamaican is born of a black woman and some English or Scotsman, the black mother is literally and figuratively kept out of sight as far as possible, but no one is allowed to forget that white father, however questionable the circumstances of birth...You get the impression that these virile Englishmen do not require women to reproduce. They just come out to Jamaica, scratch out a nest and lay eggs that hatch out into 'pink' Jamaicans.
--Zora Neale Hurston

We may no longer issue scarlet letters, but from the way we talk, we might as well: W for welfare, S for single, B for black, CC for children having children, WT for white trash. To a culture speaking with barely masked hysteria, in which branding is done with words and those branded are outcasts, this book brings a voice of reason and a warm reminder of the decency and mutual respect that are missing from so much of our public debate. Patricia J. Williams, whose acclaimed book The Alchemy of Race and Rights offered a vision for healing the ailing spirit of the law, here broadens her focus to address the wounds in America's public soul, the sense of community that rhetoric so subtly but surely makes and unmakes. In these pages we encounter figures and images plucked from headlines--from Tonya Harding to Lani Guinier, Rush Limbaugh to Hillary Clinton, Clarence Thomas to Dan Quayle--and see how their portrayal, encoding certain stereotypes, often reveals more about us than about them. What are we really talking about when we talk about welfare mothers, for instance? Why is calling someone a redneck okay, and what does that say about our society? When young women appear on Phil Donahue to represent themselves as Jewish American Princesses, what else are they doing? These are among the questions Williams considers as she uncovers the shifting, often covert rules of conversation that determine who we are as a nation.