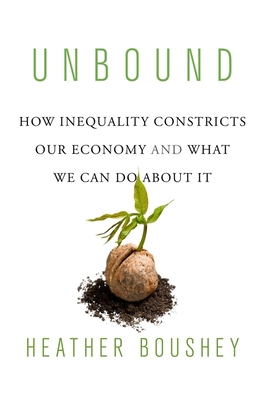 From one of Washington's most influential voices on economic policy, a lively and original argument that reducing inequality is not just fair but also key to delivering broadly shared economic growth and stability.

Do we have to choose between equality and prosperity? Many think that reducing economic inequality would require such heavy-handed interference with market forces that it would stifle economic growth. Heather Boushey, one of Washington's most influential economic voices, insists nothing could be further from the truth. Presenting cutting-edge economics with journalistic verve, she shows how rising inequality has become a drag on growth and an impediment to a competitive United States marketplace for employers and employees alike. Boushey argues that inequality undermines growth in three ways. It obstructs the supply of talent, ideas, and capital as wealthy families monopolize the best educational, social, and economic opportunities. It also subverts private competition and public investment. Powerful corporations muscle competitors out of business, in the process costing consumers, suppressing wages, and hobbling innovation, while governments underfund key public goods that make the American Dream possible, from schools to transportation infrastructure to information and communication technology networks. Finally, it distorts consumer demand as stagnant wages and meager workplace benefits rob ordinary people of buying power and pushes the economy toward financial instability. Boushey makes this case with a clear, accessible tour of the best of contemporary economic research, while also injecting a passion for her subject gained through years of research into the economics of work-life conflict and policy work in the trenches of federal government. Unbound exposes deep problems in the U.S. economy, but its conclusion is optimistic. We can preserve the best of our nation's economic and political traditions, and improve on them, by pursuing policies that reduce inequality--and by doing so, boost broadly shared economic growth.