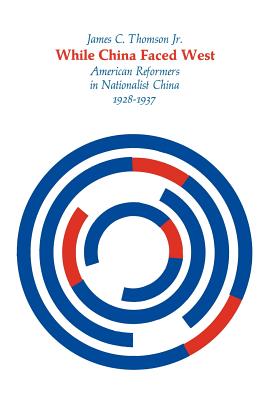 The years from 1928 to 1937 were the "Nanking decade" when the Chinese Nationalist government strove to build a new China with Western assistance. This was an interval of hope between the turbulence of the warlord-ridden twenties and the eight-year war with Japan that began in 1937. James Thomson explores the ways in which Americans, both missionaries and foundation representatives, tried to help the Chinese government and Chinese reformers undertake a transformation of rural society. His is the first in-depth study of these efforts to produce radical change and at the same time avoid the chaos and violence of revolution.

Despite the conservatism of the right wing in the Kuomintang party dictatorship, this Nanking decade saw many promising beginnings. American missionaries--the largest group of Westerners in the Chinese hinterland--often took the initiative locally, and some rallied to support of China's first modern-minded government. They assisted both in rural reconstruction programs and in efforts of at ideological reform. Thomson analyzes the work of the National Christian Council in an area of Kiangsi province recently recovered from Communist rule. He also traces the deepening involvement of missionaries and the Chinese Christian Church in the "New Life Movement," sponsored by Chiang Kai-shek.

Unhappily aware of the sharpening polarization of Chinese politics, these American reformers struggled in vain to steer clear of too close an identification with the ruling party. Yet they found themselves increasingly identified with the Nanking regime and their reform efforts obstructed by its disinclination or inability to revolutionize the Chinese countryside. In this way, American reformers in Nationalist China were forerunners of subsequent American attempts, under government sponsorship, to find a middle path between revolution and reaction in other situations of national upheaval.

For this book, James Thomson has used hitherto unexplored archives that document the participation of American private citizens in the process of Chinese social, economic, and political change.