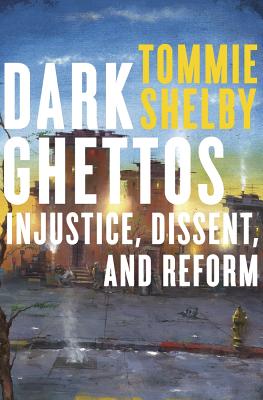 Why do American ghettos persist? Decades after Moynihan's report on the black family and the Kerner Commission's investigations of urban disorders, deeply disadvantaged black communities remain a disturbing reality. Scholars and commentators today often identify some factor--such as single motherhood, joblessness, or violent street crime--as the key to solving the problem and recommend policies accordingly. But, Tommie Shelby argues, these attempts to "fix" ghettos or "help" their poor inhabitants ignore fundamental questions of justice and fail to see the urban poor as moral agents responding to injustice.

Drawing on liberal-egalitarian philosophy and informed by leading social science research, Dark Ghettos examines the thorny questions of political morality raised by ghettos. Should government foster integrated neighborhoods? If a "culture of poverty" exists, what interventions are justified? Should single parenthood be avoided or deterred? Is voluntary nonwork or crime an acceptable mode of dissent? How should a criminal justice system treat the oppressed? Shelby offers practical answers, framed in terms of what justice requires of both a government and its citizens, and he views the oppressed as allies in the fight for a society that warrants everyone's allegiance.

"The ghetto is not 'their' problem but ours, privileged and disadvantaged alike," Shelby writes. The existence of ghettos is evidence that our society is marred by structural injustices that demand immediate rectification. Dark Ghettos advances a social vision and political ethics that calls for putting the abolition of ghettos at the center of reform.