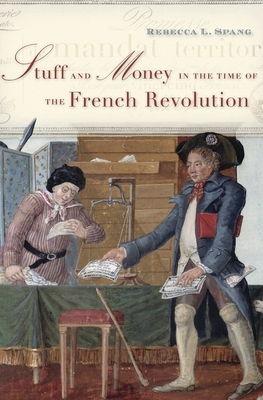 Stuff and Money in the Time of the French Revolution

Winner of the Louis Gottschalk Prize, American Society for Eighteenth-Century Studies
A Financial Times Best History Book of the Year
A Choice Outstanding Academic Title of the Year

Rebecca L. Spang, who revolutionized our understanding of the restaurant, has written a new history of money. It uses one of the most infamous examples of monetary innovation, the assignats--a currency initially defined by French revolutionaries as "circulating land"--to demonstrate that money is as much a social and political mediator as it is an economic instrument. Following the assignats from creation to abandonment, Spang shows them to be subject to the same slippages between policies and practice, intentions and outcomes, as other human inventions.

"This is a quite brilliant, assertive book."
--Patrice Higonnet, Times Literary Supplement

"Brilliant...What Spang] proposes is nothing less than a new conceptualization of the revolution...She has provided historians--and not just those of France or the French Revolution--with a new set of lenses with which to view the past."
--Arthur Goldhammer, Bookforum