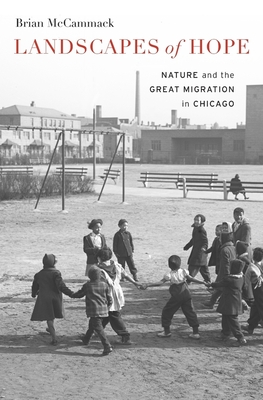 Nature and the Great Migration in Chicago

In the first interdisciplinary history to frame the African American Great Migration as an environmental experience, Landscapes of Hope travels to Chicago's parks and beaches as well as youth camps, vacation resorts, and the farms and forests of the rural Midwest. Despite persistent racial discrimination and violence in many of these places, African Americans retreated there to relax and sometimes work, reconnecting with southern identities and lifestyles they had left behind.

Between 1915 and 1940, hundreds of thousands of African Americans moved away from the South to begin new lives in the urban North. In Chicago alone, the black population quintupled to more than 275,000 in a quarter century. Most historians map the integration of southern and northern black culture through labor, religion, politics, and popular culture. Brian McCammack follows a different path, recapturing black Chicagoans as they forged material and imaginative connections to nature. In the relatively prosperous migration years but also in the depths of the Great Depression, Chicago's black community--women and men, young and old, working class and upper class--sought out, fought for, built, and enjoyed natural and landscaped environments. No matter how crowded or degraded, green spaces provided a refuge for black Chicagoans and an opportunity to realize the promise of nature and of the Great Migration itself.

Situated at the intersection of race and place in American history, Landscapes of Hope traces the contours of a black environmental consciousness that runs throughout the African American experience.