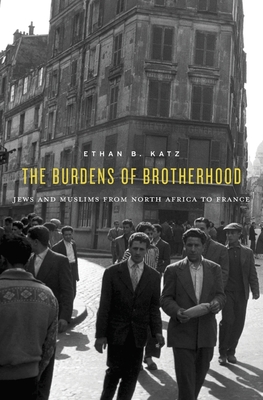 Jews and Muslims from North Africa to France

Headlines from France suggest that Muslims have renewed an age-old struggle against Jews and that the two groups are once more inevitably at odds. But the past tells a different story. The Burdens of Brotherhood is a sweeping history of Jews and Muslims in France from World War I to the present. "Katz has uncovered fascinating stories of interactions between Muslims and Jews in France and French colonial North Africa over the past 100 years that defy our expectations...His insights are absolutely relevant for understanding such recent trends as rising anti-Semitism among French Muslims, rising Islamophobia among French Jews and, to a lesser degree, rising rates of aliyah from France."
--Lisa M. Leff, Haaretz "Katz has written a compelling, important, and timely history of Jewish/Muslim relations in France since 1914 that investigates the ways and venues in which Muslims and Jews interacted in metropolitan France...This insightful, well-researched, and elegantly written book is mandatory reading for scholars of the subject and for those approaching it for the first time."
--J. Haus, Choice