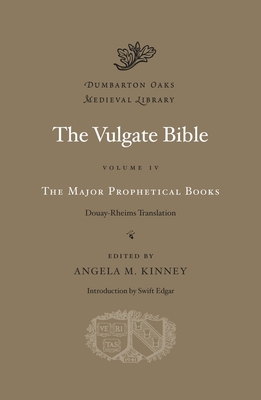 This is the fourth volume of a projected six-volume Vulgate Bible. Compiled and translated in large part by Saint Jerome at the turn of the fifth century ce, the Vulgate Bible permeated the Western Christian tradition through the twentieth century. It influenced literature, art, music, and education, and its contents lay at the heart of Western theological, intellectual, artistic, and political history through the Renaissance. At the end of the sixteenth century, professors at a Catholic college first at Douay, then at Rheims, translated the Vulgate Bible into English to combat the influence of Protestant vernacular Bibles.

Volume IV presents the writings attributed to the "major" prophets (Isaiah, Jeremiah, Ezekiel, and Daniel), which feature dire prophecies of God's impending judgment, punctuated by portentous visions. Yet profound grief is accompanied by the promise of mercy and redemption, a promise perhaps illustrated best by Isaiah's visions of a new heaven and a new earth. In contrast with the Historical Books, the planned salvation includes the gentiles.

Angela M. Kinney is a doctoral candidate at the University of Illinois at Urbana-Champaign and research associate at Dumbarton Oaks Research Library and Collection. Author's Home: Washington, DC
or
Not Currently Available for Direct Purchase
Copyright © 2020 American Booksellers Association