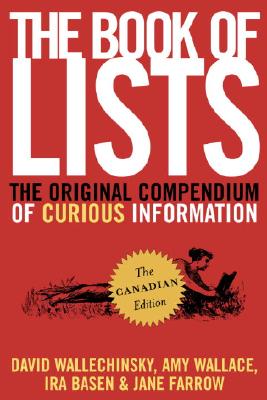 The Book of Lists, The Canadian Edition (Paperback)

The Original Compendium of Curious Information

A new edition of the classic bestseller from the original authors, with additional material specifically prepared for Canadian readers by long-time This Morning CBC producer, Ira Basen, and Jane Farrow, the author of Wanted Words.

In 1977, a publishing sensation was born. The Book of Lists, the first and best compendium of facts weirder than fiction, was published. Filled with intriguing information and must-talk-about trivia it has spawned many imitators — but none as addictive or successful.

For nearly three decades since, the editors have been researching curious facts, unusual statistics and the incredible stories behind them. Now the most entertaining and informative of these have been brought together in a long-awaited, thoroughly up-to-date new edition that is also the first Canadian edition. Ira Basen and Jane Farrow have augmented the existing lists with fascinating homegrown material, and compiled lists specifically of relevance to Canadian readers.

So if you’ve always wanted to find out how porcupines really mate, how comedy can kill and — that most essential piece of knowledge — how long the longest recorded nose was, this is the book for you. With contributions from a variety of celebrities and experts including Margaret Atwood, Mike Myers, Michael Ondaatje, Dave Eggers, Phillip Pullman and Charlotte Gray, this anthology has something for everyone — and more than you ever suspected you wanted to know.

David Wallechinsky is the author of numerous books including The People’s Almanac Presents the Twentieth Century: History with the Boring Parts Left Out and The Complete Book of the Olympics.

Amy Wallace is the co-author of four previous volumes of The Book of Lists, as well as several other popular reference books. She also wrote the bestselling memoir Sorcerer’s Apprentice: My Life with Carlos Castaneda.

Ira Basen is a long-time CBC Radio producer. He worked together with Jane on Workology, and has also produced This Morning, Quirks & Quarks and Sunday Morning. His book Spin will be published by Penguin Books in 2006.

Jane Farrow is the author of Wanted Words and Wanted Words 2. She has hosted the CBC Radio One programs The Omnivore, Home and Workology.
or
Not Currently Available for Direct Purchase
Copyright © 2020 American Booksellers Association