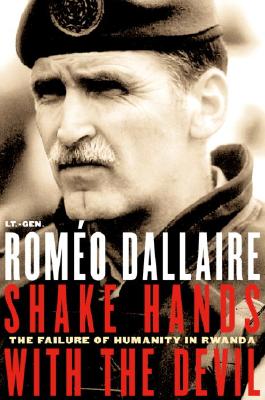 Shake Hands With the Devil (Hardcover)

On the tenth anniversary of the date that UN peacekeepers landed in Rwanda, Random House Canada is proud to publish the unforgettable first-hand account of the genocide by the man who led the UN mission. Digging deep into shattering memories, General Dallaire has written a powerful story of betrayal, naïveté, racism and international politics. His message is simple and undeniable: “Never again.”

When Lt-Gen. Roméo Dallaire received the call to serve as force commander of the UN intervention in Rwanda in 1993, he thought he was heading off on a modest and straightforward peacekeeping mission. Thirteen months later he flew home from Africa, broken, disillusioned and suicidal, having witnessed the slaughter of 800,000 Rwandans in only a hundred days. In Shake Hands with the Devil, he takes the reader with him on a return voyage into the hell of Rwanda, vividly recreating the events the international community turned its back on. This book is an unsparing eyewitness account of the failure by humanity to stop the genocide, despite timely warnings.

Woven through the story of this disastrous mission is Dallaire’s own journey from confident Cold Warrior, to devastated UN commander, to retired general engaged in a painful struggle to find a measure of peace, reconciliation and hope. This book is General Dallaire’s personal account of his conversion from a man certain of his worth and secure in his assumptions to a man conscious of his own weaknesses and failures and critical of the institutions he’d relied on. It might not sit easily with standard ideas of military leadership, but understanding what happened to General Dallaire and his mission to Rwanda is crucial to understanding the moral minefields our peacekeepers are forced to negotiate when we ask them to step into the world’s dirty wars.

Excerpt from Shake Hands with the Devil
My story is not a strictly military account nor a clinical, academic study of the breakdown of Rwanda. It is not a simplistic indictment of the many failures of the UN as a force for peace in the world. It is not a story of heroes and villains, although such a work could easily be written. This book is a cri de coeur for the slaughtered thousands, a tribute to the souls hacked apart by machetes because of their supposed difference from those who sought to hang on to power. . . . This book is the account of a few humans who were entrusted with the role of helping others taste the fruits of peace. Instead, we watched as the devil took control of paradise on earth and fed on the blood of the people we were supposed to protect.

Lt.-Gen. Romeo Dallaire joined the Canadian army in 1964. Upon his return from serving as Force Commander of the UN mission to Rwanda, he served as Commander of the 1st Canadian Division and Deputy-Commander of the Canadian Army. Promoted to Three-Star General, he was appointed to various senior positions including Assistant Deputy Minister (Human Resources-Military) in the Ministry of Defence. He continues to assist the Canadian Forces and Veterans' Affairs in matters related to Post-Traumatic Stress Disorder. General Dallaire was medically released from the Armed Forces in April 2000 due to PTSD, and is now Special Adviser to the Canadian Government on War Affected Children and the Prohibition of Small Arms Distribution. He is married and the father of three children.

Praise For Shake Hands With the Devil: The Failure of Humanity in Rwanda…

“Lt. General Roméo Dallaire is revered by Canadians everywhere. When I finished the book, I could understand why. Here was a man who screamed into the void. No one listened, no one cared, no one heard. But he never stopped screaming. He valued every human life. He wept for every human loss. He never gave up.”
—Stephen Lewis in The Walrus

“Using the detailed daily notes that were taken by his assistant in the field, Gen. Dallaire painstakingly recreated the events leading up to the genocide and provides a minute-by-minute account of the eruption of bloodshed in April, 1994, as his pleas for reinforcements to UN headquarters in New York were ignored.”
—Stephanie Nolen, The Globe and Mail

“Almost certainly the most important book published in Canada this year.”
—The Globe and Mail

“It [is] a story of international indifference and political failure, but it [is] also one of the most profoundly disturbing tales of the century.”
—The Ottawa Citizen

“With considerable effort, pain and sacrifice, retired Lieutenant-General Romeo Dallaire has provided us with an insider’s account of how he struggled with one of the most horrific events in the 20th century while an indifferent world and an incompetent United Nations looked on. Hopefully, this well written and comprehensive book represents the last chapter in Dallaire’s painful Rwandan journey.”
—The National Post

“Shake Hands with the Devil [is] one of the year’s, if not the decade’s, most important events in Canadian publishing.... Dallaire gives us something to believe in. That he has done so with his eyes and heart wide open to the worst our species has to offer is a monumental achievement. Shake Hands with the Devil delivers this remarkable man and his story to us.”
—Vancouver Sun; Times-Colonist (Victoria)

“[O]n the enormously important issue of Third World development and the moral obligation of the Western world to assist the dispossessed, [Shake Hands With The Devil] is a powerful cri de coeur for the powerless, and a gut-wrenching description of what really happened during those awful months 10 years ago.”
—The Toronto Star

“Dallaire, the proud, dedicated Canadian in charge of that mission, a man of deep humanitarian conviction.”
—The Ottawa Citizen

“The very spareness of the prose reflects a supreme effort at self-mastery and heightens the anguish described....He manages to convey the full horror of the genocide in relatively few passages of extraordinary, wrenching lyric power....This is a book to read — to understand what genocide means, to relect on the failure of “humanity,” and to be inspired by the courage of the few in the face of genocidal horror and international indifference.”
—The Gazette

“With the best intentions in the world, we asked Romeo Dallaire to inhabit an unspeakable world for us, to witness horrors beyond imagining, to carry a moral burden that no one person should ever have had to shoulder. He has now done us the immeasurable service of setting out in print what price that burden exacted on his mind and his soul…. ”
—The Gazette

“Anyone wondering whether the United Nations still has a role to play ought to be reading Romeo Dallaire’s long-awaited account of the Rwandan massacre. Shake Hands with the Devil is a harsh, uncompromising account of a great catastrophe — one the great powers saw coming and chose not to prevent. This is an important book….”
—Edmonton Sun

“As painful as Shake Hands with the Devil is to read, it is impossible to imagine the agony it author had to go through to write it…. What he witnessed, what he was incapable of stopping, would have broken anyone. Dallaire’s condemnation of the free world is stark and uncompromising…. It is impossible to read this memoir — written in meticulous detail — without feeling sick and without feeling rage…. ”
—Calgary Herald

“[A] powerful story of leadership and sacrifice, of moral and physical courage, and a deep love of humanity. In short, a story of a fine soldier and a hero.”
—The Edmonton Journal

“This is an important book because it is a factual record of the genocide of recent times…. So we encounter with him the misery and chaos and the sheer unadulterated terror of living through an unnecessary and avoidable atrocity…. Read this book and rediscover if you have lost it, your capacity for moral outrage.”
—Winnipeg Free Press

“Shake Hands with the Devil, Dallaire’s powerfully eloquent reconstruction of genocide, [is] a haunting story of evil….That he has survived and found a way to write about those events is a triumph. Not a book for the faint of heart, perhaps. But Shake Hands with the Devil should be mandatory reading for Western leaders and citizens of every country that pays lip service to the peacekeeping ideals and the sanctity of human life.”
—The Chronicle-Herald (Halifax)

“[Dallaire’s] passionate, disturbing memoir of those awful days is harrowing reading…. It is a savage book…. But his humanity shines through, unlike so many others tainted by the blood of innocents.”
—The Calgary Sun

“[Shake Hands with the Devil] is an affidavit for an indictment — an indictment of the murderers, the hamstrung, bureaucratized UN, and the self-absorbed developed world…. If Shake Hands with the Devil serves as an introduction to the Rwandan genocide, even for those only voyeuristically in what happened to a Canadian general, it has surpassed its original intent. For all this, Romeo Dallaire emerges as our post-Cold War hero.”
—Quill & Quire

“To read his soul-searching book is to feel a rush of empathy with its author. It is also to confront uncomfortable truths … Shake Hands with the Devil is an uncommonly courageous work, wrung from the depths of despair and wrought in plain, forthright prose … Abroad in the world, the Canadian humanitarian needs a saint’s compassion, a scholar’s knowledge, and a soldier’s strength. Bravely and passionately, Romeo Dallaire has shown us where to start.”
—Literary Review of Canada

“In his book, Shake Hands with the Devil, Dallaire has documented the callousness and inertia that precluded military intervention in Rwanda. The book is a scathing indictment of the United Nations and its member countries and a dire warning of the consequences to be expected when we choose to not get involved.”
—The Hamilton Spectator

“… retired Lieutenant General Romeo Dallaire has writeen a book that is sure to mark all those that read it … Shake Hands With the Devil is a book with a message … LGen Dallaire’s ‘cri du coeur’ is a must read.”
—The Edmonton Sun

“… there’s something about [Shake Hands With the Devil] that is Shakespearean — this sincere soul with a solid heart who tries to do the right thing while the rest of the world cynically covers their butts …”
—Michael Donovan, interviewed in The Globe and Mail

“…[a] remarkable book. I hope Canadians will read this book…Dallaire does not spare us any of the details, for which, once again, thank you!...Read this book! Thank you, again, Dallaire — not just for the book, but also your service to Canada and the world.”
—The Guelph Mercury