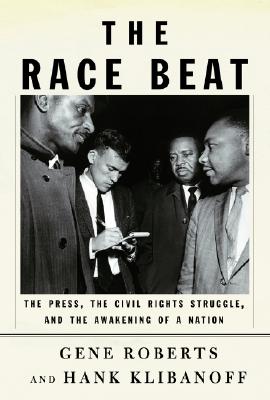 This is the story of how America awakened to its race problem, of how a nation that longed for unity after World War II came instead to see, hear, and learn about the shocking indignities and injustices of racial segregation in the South—and the brutality used to enforce it.

It is the story of how the nation’s press, after decades of ignoring the problem, came to recognize the importance of the civil rights struggle and turn it into the most significant domestic news event of the twentieth century.

Drawing on private correspondence, notes from secret meetings, unpublished articles, and interviews, veteran journalists Gene Roberts and Hank Klibanoff go behind the headlines and datelines to show how a dedicated cadre of newsmen—first black reporters, then liberal southern editors, then reporters and photographers from the national press and the broadcast media—revealed to a nation its most shameful shortcomings and propelled its citizens to act.

We watch the black press move bravely into the front row of the confrontation, only to be attacked and kept away from the action. Following the Supreme Court’s 1954 decision striking down school segregation and the South’s mobilization against it, we see a growing number of white reporters venture South to cover the Emmett Till murder trial, the Montgomery bus boycott, and the integration of the University of Alabama.

We witness some southern editors joining the call for massive resistance and working with segregationist organizations to thwart compliance. But we also see a handful of other southern editors write forcefully and daringly for obedience to federal mandates, signaling to the nation that moderate forces were prepared to push the region into the mainstream.

The pace quickens in Little Rock, where reporters test the boundaries of journalistic integrity, then gain momentum as they cover shuttered schools in Virginia, sit-ins in North Carolina, mob-led riots in Mississippi, Freedom Ride buses being set afire, fire hoses and dogs in Birmingham, and long, tense marches through the rural South.

For many journalists, the conditions they found, the fear they felt, and the violence they saw were transforming. Their growing disgust matched the mounting countrywide outrage as The New York Times, Newsweek, NBC News, and other major news organizations, many of them headed by southerners, turned a regional story into a national drama.

Meticulously researched and vividly rendered, The Race Beat is an unprecedented account of one of the most volatile periods in our nation’s history, as told by those who covered it.


Praise For The Race Beat: The Press, the Civil Rights Struggle, and the Awakening of a Nation…

"The Race Beat is a compelling reminder of the need for a vibrant and free press, with the resources and resourcefulness to shine a light on the nation's wrongs."
--Sarah Schweitzer, Boston Globe

"A masterpiece . . . The Race Beat is a riveting piece of social history that balances both its subjects brilliantly . . . There has never been a better study of the importance of a free press."
--Thomas Lipscomb, The Philadelphia Inquirer

"Reading this history . . . takes me back to my youth in vivid and intensely personal ways . . . It was at once one of the most terrible times in the nation's history and one of the most enthralling . . . The stories of these men . . . are essential to the history of the civil rights movement."
--Jonathan Yardley, Washington Post Book World

"A richly textured and balanced narrative that reveals the strengths and weaknesses of the news media."
--Raymond Arsenault, The New York Times Book Review

"A magnificent recounting of a tumultuous period in our history . . . Rich in detail, powerful and compelling . . . A reminder of the importance of the press to a democracy."
--Anthony Marro, Newsday

"Heroes of the civil rights movement . . . are brought to life through the eyes of journalists who covered them . . . Research for The Race Beat is meticulous, uncovering many facts that have gone unreported in other books about the movement."
--Jerry Mitchell, The Chicago Sun-Times

"The Race Beat has good characters, good yarns and good thinking. Just as important, though, it's got a good heart."
--David Gates, Newsweek

"Just when you think there's nothing left to say about the civil rights movement . . . A fascinating history of how the media handled that story."
--Jon Wiener, The Los Angeles Times Book Review

"A smart and serious book . . . The Race Beat reminds us of the potential of the press to serve as a powerful tool for democracy."
--Michael O'Donnell, Christian Science Monitor

"The Race Beat is one of those remarkable works of history that make you see your own times more clearly."
--Eric Alterman, The Nation

"Bracing . . . Roberts and Klibanoff . . . use the prism of the reporters' experience to enhance understanding of the main storyline."
--David Greenberg, The American Prospect

"A work that is certain to take its place on the top shelf of books about the civil rights movement."
--Ray Jenkins, The Baltimore Sun

"Excellent . . . The Race Beat is a reminder that the newgathering business, done right, is capable of honor."
--Bill Millsaps, Richmond Times-Dispatch

"The Race Beat reminded me of the rejuvenating energy to be found on the right side of a great story."--Steve Duin, The Oregonian

"Superb . . . Its scope is ambitious, its research is impressive and its journalistic portraits are memorable."
--Craig Flournoy, Dallas Morning News

"Finally, this epic is pulled together, and the stories could be in no better hands."
--William McKeen, St. Petersburg Times

"Reminds us of the heroism of civil rights demonstrators and strategists and introduces us to the bravery of the storytellers."
--Claudia Smith Brinson, The State (Columbia, South Carolina)

"A heartening and illuminating book about a time when some journalists got the story right, and did so to the enormous benefit of this country."
--Linda B. Blackford, The Lexington Herald-Leader

"A fascinating history of how the media handled [the civil rights] story."
--Birmingham Times

"The . . . authors make a compelling and well-documented case that the [civil rights] movement's success was made possible only by the dogged efforts of the reporters committed to its coverage."
--Adam Emerson, The Tampa Tribune

"The authors demonstrate the profound changes the movement wrought not only on U.S. social justice but also on American journalism."
--Booklist

"[A] gripping account of how America and the world found out about the Civil Rights movement."
--Publishers Weekly

"A sweeping, often engrossing narrative of the role that print and broadcast reporters played in the [civil rights] movement."
--Library Journal

“I can think of no better illustration of the indivisible relationship between democracy and a free press than this account of the journalists who chronicled the civil rights movement, particularly the editorialists whose powerful voices struggled to keep the South in the mainstream. Roberts and Klibanoff have produced not only a splendid anecdotal narrative about one of the greatest beats in history but also an humbling examination of the process by which truth reveals itself, often after society has exhausted all means of ignoring it.”
–Diane McWhorter, author of Carry Me Home: Birmingham, Alabama: The Climatic Battle of the Civil Rights Revolution

“Roberts and Klibanoff have succeeded in telling the dramatic story of the extraordinary courage of great reporters like Bill Minor, Claude Sitton, John Herbers and Karl Fleming–war correspondents on native soil–during one of American journalism’s finest hours.”
–David Halberstam

“A great book, and it could not be more timely. Gene Roberts and Hank Klibanoff remind us of one of the proudest moments in our history: the way the U.S. press rose to its challenge in covering the civil rights movement that led to the ending of the shameful segregated society of our recent past. Theirs is a wise, and powerful, rendering of an epic achievement–one that, as Roberts and Klibanoff eloquently write, awakened the nation and summoned the best in the American character to right wrongs and uphold the proudest principles of our democracy.”
–Haynes Johnson, Pulitzer-Prize winner for his coverage of the Selma civil rights crisis

“This powerful, moving, well-researched account of the bravery and courage of the media at its finest hour is a must-read for every American, but especially for members of the press and for every student of journalism.”
–Congressman John Lewis

“A mountain of reporting, The Race Beat is about the courageous and unheralded black reporters who pioneered coverage of the historical insult of segregation, the white reporters who waded into the melee and forced America to pay attention, but it is also about southern journalists caught very publicly on the wrong side of history. With both sweep and a treasure of arresting detail, it is an important contribution to the history of 20th century America, and a vital portrait of the importance of journalism in our society.” –Mark Bowden, author of Guests of the Ayatollah: The First Battle in America’s War with Militant Islam

“The Race Beat is a splendid, highly readable and thoroughly researched account of the complete spectrum of journalists, black and white, good and bad–including those whose commitment, courage and sheer talent gave the movement for social justice the ‘publicity’ it deserved.”
–Cynthia Tucker, editorial page editor, The Atlanta Journal-Constitution