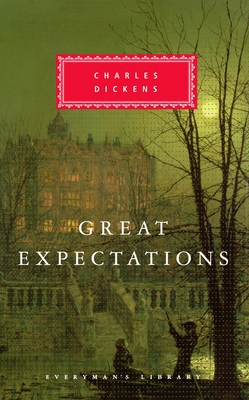 One of Charles Dickens’s most fascinating novels, Great Expectations follows the orphan Pip as he leaves behind a childhood of misery and poverty after an anonymous benefactor offers him a chance at the life of a gentleman.

From the young Pip’s first terrifying encounter with the convict Magwitch in the gloom of a graveyard to the splendidly morbid set pieces in Miss Havisham’s mansion to the magnificently realized boat chase down the Thames, Great Expectations is filled with the transcendent excitement that Dickens could so abundantly provide.

Written in 1860, at the height of his maturity, it also reveals the novelist’s bittersweet understanding of the extent to which our deepest moral dilemmas are born of our own obsessions and illusions.

“Great Expectations may be called a novel without a hero . . . In [it] Dickens was really trying to be a quiet, a detached, and even a cynical observer of human life . . . And the final and startling triumph of Dickens is this: that even to this moderate and modern story he gives an incomparable energy which is not moderate and which is not modern. He is trying to be reasonable; but in spite of himself he is inspired.” –G. K. Chesterton

“Great Expectations [is] generally regarded as Dickens’s artistic masterpiece, and a novel profoundly serious in its psychological and sociological import . . . Dickens tell[s] a universal story of human passions, mutual exploitation, selfishness, self-delusion, and selflessness . . . [It] is the subtlest and most profound, as well as the most triumphantly achieved, of all his great novels.” –From the Introduction by Michael Slater

Dickens's marriage to Catherine Hoggarth produced ten children but ended in separation in 1858. In that year he began a series of exhausting public readings; his health gradually declined. After putting in a full day's work at his home at Gads Hill, Kent on June 8, 1870, Dickens suffered a stroke, and he died the following day.
Loading...
or support indie stores by buying on