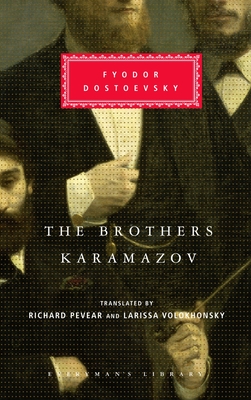 Dostoevsky’s last and greatest novel is, above all, the story of a murder, told with hair-raising intellectual clarity and a feeling for the human condition unsurpassed in world literature. It is a masterpiece that chronicles the bitter love-hate struggle between an outsized father and his three very different sons.

The author's towering reputation as one of the handful of thinkers who forged the modern sensibility has sometimes obscured the purely novelistic virtues – brilliant characterizations, flair for suspense and melodrama, instinctive theatricality – that made his work so immensely popular in nineteenth-century Russia.

This award-winning translation by Richard Pevear and Larissa Volokhonsky – the definitive version in English – magnificently captures the rich and subtle energies of Dostoevsky’s masterpiece.

“[Dostoevsky is] at once the most literary and compulsively readable of novelists we continue to regard as great . . . The Brothers Karamazov stands as the culmination of his art–his last, longest, richest, and most capacious book. [This] scrupulous rendition can only be welcomed. It returns us to a work we thought we knew, subtly altered and so made new again.” –Washington Post Book World

“A miracle . . . Every page of the new Karamazov is a permanent standard, and an inspiration.” –The Times (London)

“Absolutely faithful . . . Fulfills in remarkable measure most of the criteria for an ideal translation . . . The stylistic accuracy and versatility of registers used . . . bring out the richness and depth of the original in a way similar to a faithful and sensitive restoration of a painting.” –The Independent

“Heartily recommended to any reader who wishes to come as close to Dostoevsky’s Russian as it is possible.” –Joseph Frank, Princeton University

With an Introduction by Malcolm V. Jones

Fyodor Dostoevsky's life was as dark and dramatic as the great novels he wrote. He was born in Moscow in 1821, and when he died in 1881, he left a legacy of masterworks that influenced the great thinkers and writers of the Western world and immortalized him as a giant among writers of world literature.
Loading...
or support indie stores by buying on
(This book is on backorder)