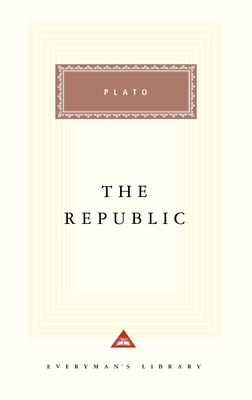 Toward the end of the astonishing period of Athenian creativity that furnished Western civilization with the greater part of its intellectual, artistic, and political wealth, Plato wrote The Republic, his discussion of the nature and meaning of justice and of the ideal state and its ruler. All subsequent European thinking about these subjects owes its character, directly or indirectly, to this most famous (and most accessible) of the Platonic dialogues. Although he describes a society that looks to some like the ideal human community and to others like a totalitarian nightmare, in the course of his description Plato raises enduringly relevant questions about politics, art, education, and the general conduct of life.  The translation is by A. D. Lindsay.

“If our world and Homer’s are no longer the same, that is largely because of Plato, and perhaps most of all because of Plato’s most famous book, The Republic. This work was its author’s main weapon in his fight to forge a new world, to replace the quarrelsome magnificence of Achilles and Odysseus with the rational grandeur of Socrates . . . [The Republic] does not simply underlie some of our more abstruse theories. It is part of the fabric of our common sense.” –from the Introduction by Alexander Nehamas

Plato, with Socrates and Aristotle, is the founder of the Western intellectual tradition. Like his mentor Socrates, he was essentially a practical philosopher who found the abstract theory and visionary schemes of many contemporary thinkers misguided and sterile. He was born about 429 B.C. in Athens, the son of a prominent family that had long been involved in the city's politics. Extremely little survives of the history of Plato's youth, but he was raised in the shadow of the great Peloponnesian War, and its influence must have caused him to reject the political career open to him and to become a follower of the brilliantly unorthodox Socrates, the self-proclaimed "gadfly" of Athens.

Socrates' death in 399 B.C. turned Plato forever from politics, and in the next decade he wrote his first dialogues, among them Apology and Euthyphro. At age forty, Plato visited Italy and Syracuse, and upon his return he founded the Academy-Europe's first university-in a sacred park on the outskirts of Athens. The Academy survived for a millennium, finally closed by the emperor Justinian in A.D. 529. Plato hoped his school would train its pupils to carry out a life of service and to investigate questions of science and mathematics. Plato's old age was probably devoted to teaching and writing, he died in Athens in 348 B.C.
Loading...
or
Not Currently Available for Direct Purchase