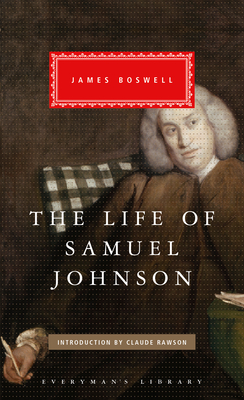 The Life of Samuel Johnson

One of the greatest and most compelling of all biographies in literature had its beginnings on a fateful day in London in 1763, when young James Boswell determinedly attached himself to the dominant literary figure of his age—the splendidly humane, devastatingly witty, often troubled Dr. Samuel Johnson. What followed was one of the most famous of literary friendships, one that Boswell carefully documented over the years and eventually made the basis of an extraordinarily vivid group portrait.

Johnson was at the center of a brilliant circle that included the painter Sir Joshua Reynolds, the actor David Garrick, the writers Frances Burney and Edmund Burke, and even King George III. By incorporating conversations he had recorded and including a wealth of personal and human details in his LIFE OF SAMUEL JOHNSON, Boswell revolutionized the art of biography. He not only managed to bring to life the towering and complicated figure of Johnson, but also provided an intimate picture of private life that mingled the hero’s humbler friends with the greatest talkers of a talkative age. The result is an enduring monument to a remarkable man that ensured Boswell’s own place in literary history.

James Boswell was born in Edinburgh, Scotland in 1740. He attended the University of Glasgow and is now considered one of the greatest biographers in the history of Western literature. He died in 1795.
Loading...
or
Not Currently Available for Direct Purchase