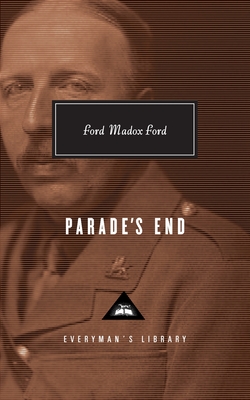 Ford Madox Ford's acclaimed masterpiece is widely considered one of the best novels of the twentieth century.

Parade's End was originally published in four parts (Some Do Not . . ., No More Parades, A Man Could Stand Up--, and Last Post) between 1924 and 1928. It explores the world of the English ruling class as it descends into the chaos of World War I, as seen through the life of Christopher Tietjens, an officer from a wealthy family who is torn between his unfaithful wife, Sylvia, and his suffragette mistress, Valentine. With scenes of sexual warfare that rival the devastation of its battlefield scenes, Parade's End is a profound dramatization of one man's internal struggles during a time of brutal world conflict. The culminating achievement of Ford's career, it fulfills his ambitious conception of the novelist's role as the historian of the present, capturing the essence of the age.

Ford Madox Ford was born Ford Hermann Hueffer in England in 1873. In 1919 he changed his name to Ford Madox Ford in honour of his grandfather, the Pre-Raphaelite painter Ford Madox Brown, whose biography he had written. Ford was well-known for both his fiction and his criticism. He founded two influential journals, The English Review in 1908 and The Transatlantic Review in 1924, in which he championed many of the leading modernist writers of the day. His most famous novels include the tetralogy Parade’s End and The Good Soldier, which are still ranked among the greatest literary works of the twentieth century. Ford died in 1939, at age sixty-five, in France.

“There are not many English novels which deserve to be called great: Parade’s End is one of them.” —W. H. Auden
or support indie stores by buying on
Copyright © 2020 American Booksellers Association