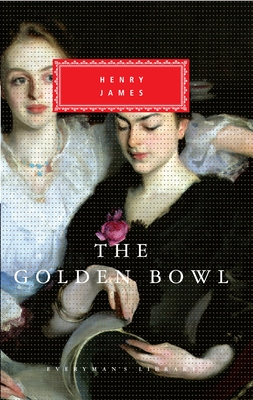 The wealthy American widower Adam Verver and his shy daughter, Maggie, live in Europe, closely tied through their love of art and their mutual admiration.  Maggie's future seems assured when she becomes the wife of a charming, though impoverished, Italian prince. But when Adam marries his daughter's friend Charlotte Stant, unaware that she is the prince's mistress, the stage is set for a complex and indirect battle between the two wives. The brilliant Charlotte is determined to keep her lover, while Maggie is determined to protect her beloved father from any knoweldge of their shared betrayal.

The acuity with which Henry James calibrates the four characters' delicately shifting alliances and documents the maturation of a naïve young woman marks this as a magnificent achievement. The Golden Bowl was not only James's last major work but also the novel in which his unparalleled gift for psychological drama reached its height.

Henry James was born on April 15, 1843, on Washington Place in New York to the most intellectually remarkable of American families. His father, Henry James Sr., was a brilliant and eccentric religious philosopher; his brother was one of the first great American psychologists and the author of the influential Pragmatism; his sister, Alice, though an invalid for most of her life, was a talented conversationalist, a lively letter writer, and a witty observer of the art and politics of her time.

In search of the proper education for his children, Henry senior sent them to schools in America, France, Germany, and Switzerland. Returning to America, Henry junior lived in Newport, briefly attended Harvard Law School, and in 1864 began contributing stories and book reviews to magazines. Two more trips to Europe led to his final decision to settle there, first in Paris in 1875, then in London next year.

James's first major novel, Roderick Hudson, appeared in 1875, but it was Daisy Miller (1878) that brought him international fame as the chronicler of American expatriates and their European adventures. His novels include The American (1877), Washington Square (1880),Princess Casamassima (1886), and the three late masterpieces, The Wings of the Dove (1902), The Ambassadors (1903) and The Golden Bowl (1904). He also wrote plays, criticism, autobiography, travel books (including The American Scene, 1907) and some of the finest short stories in the English language.

His later works were little read during his lifetime but have since come to be recognized as forerunners of literary modernism. Upon the outbreak of World War I, James threw his energies into war relief work and decided to adopt British citizenship. One month before his death in 1916, he received the Order of Merit from King George V.
or
Not Currently Available for Direct Purchase
Copyright © 2020 American Booksellers Association